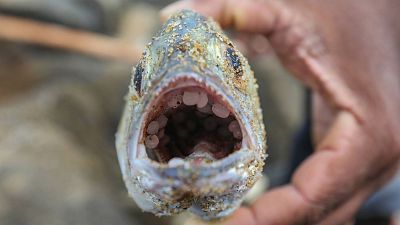 A fish dies as a result of ingesting nurdles. A total of over 470 turtles, nearly 50 dolphins and 8 whales are been washed ashore, dead, after Sri Lanka's nurdle spill.   -   Copyright  Centre for Environmental Justice, Sri Lanka
By Charlie Jaay  •  Updated: 12/12/2021

Nurdles are the raw material of the plastics industry.

Packed and shipped, in their billions, around the world, these lentil sized plastic pellets are then melted down and used as the building blocks for a vast array of items used in our daily lives - from computers and cars, to clothes and drink bottles.

Although the first reported sighting of nurdles on beaches was not until 1970, they have since been found on every continent except Antarctica.

There are now calls for this type of pollution to be taken much more seriously, as their size and persistence make them virtually impossible to remove, once in the environment.

Nurdles are lost at every stage of handling. According to Plastic Soup Foundation, each year, 230,000 tonnes enter our oceans and, within the EU alone, 23 billion nurdles a day end up in the environment. Making their way down storm drains, into rivers and waterways, and eventually reaching our oceans, they are then distributed by wind and ocean currents to every corner of our planet, but are practically impossible to clean up due to their size.

Nurdles devastate the environment and marine life but, despite being one of the biggest sources of pollution in our oceans, they are often overlooked.

They tend to only hit the headlines when significant spills from containers are lost at sea during transportation.

A social and environmental tragedy

One such incident occurred earlier this year, in pristine waters off the coast of Sri Lanka.

The cargo ship X-Press Pearl caught fire while carrying 350 tonnes of heavy fuel, spilling out nearly 1,700 tonnes of nurdles, and 9,700 tonnes of other plastics and toxic pollutants. With nurdles washing up along hundreds of miles of coastline, and accumulating on beaches up to two metres high, it is the worst marine environmental disaster in the country’s history - and the single largest nurdle pollution event the world has seen.

The ensuing pollution has caused an overwhelming economic, social and environmental impact. Over 20,000 fishermen cannot fish in the area, losing access to their livelihoods, and marine habitats are now ruined.

“There are still large amounts of plastic nurdles, and burnt microplastics hidden in the water and sand, especially along the coastline between Colombo and Negombo,” says Hemantha Withanage, Executive Director of the Centre for Environmental Justice, Sri Lanka.

“These degrade slowly, so will be around for the next 500 to 1000 years. They will not just affect marine life and human health, but also tourism and livelihoods, for years to come.”

A threat to both marine life and humans

Often mistaken for fish eggs, nurdles are ingested by seabirds and fish, causing malnutrition and starvation.

The high concentrations of environmental pollutants they absorb, in addition to chemicals used during their production, also find their way into marine creatures. Not only do these harmful substances then build up in the food chain, they can also enter our bodies, through the fish and seafood we eat, causing a variety of problems.

Last year, for the first time, microplastics were found in human organs - and babies are thought to be full of them.

Spillage can impact ecosystems, and even change characteristics, such as temperature and permeability of sand on a beach, in turn affecting animals such as endangered sea turtles which incubate their eggs in this habitat.

What about threats to the climate?

We know the fossil fuel and plastic industries are deeply connected.

Nurdles, along with other plastics, are made from chemicals sourced from fossil fuels, and emit greenhouse gases at each stage of their lifecycle, including afterlife.

According to a 2019 study by the Centre for International Environmental Law, by 2030, annual global emissions linked to plastic could reach the equivalent of almost 300 coal-fired power plants.

Have there been attempts at reducing spills?

Operation Clean Sweep (OCS) is an international initiative from the plastics industry to reduce loss of nurdles to the environment. Companies which are part of this scheme are issued guidelines to help prevent pellet loss from their sites. Although OCS makes a good starting point, signing up is voluntary and no checks occur to make sure promises are followed through.

This scheme also does not represent the whole plastics supply chain around the world and, in Europe, only a small percentage of the estimated 55,000 companies involved in the supply chain have so far signed up.

Fidra is an environmental charity working to reduce plastic waste and chemical pollution, and through its ‘Great Global Nurdle Hunt’ aims to understand more about nurdle density and distribution. This year, nurdles were found in 91 per cent of the countries taking part.

“Over 900 people took part in nurdle hunts on beaches and waterways around the world this year,” says Heather McFarlane, Project Manager at Fidra.

“Looking for nurdles not only gives us data on pollution, it also shows people care about this ongoing plastic problem and want to see more action to address it, from industry and governments.”

Despite our understanding of nurdle spills as a chronic environmental hazard, they are still lost in their billions.

30 years after Operation Clean Sweep, there are no obligations for those in the plastics industry to ensure good operational practice, although there is now growing recognition of the urgent need to prevent nurdles escaping into the landscape.

Fidra is calling for a supply chain approach. This is where all companies handling plastic pellets - from petrochemical producers creating billions of pellets an hour, and those transporting pellets across the world, to microbusinesses buying bags of pellets to make products - implement best practice measures.

All these companies need a way to prove they are handling nurdles responsibly so every part of the supply chain, including consumers, will know the plastic isn’t contributing to pollution.

Despite plastics from sea-based sources accounting for around 20 per cent of plastic pollution, and marine nurdle spills being recorded off Hong Kong, South Africa and in the North Sea over the past decade, the International Maritime Organisation (IMO), a UN body which regulates global shipping, has repeatedly delayed discussion on the issue of these plastic pellets.

These calls are backed by Sri Lanka’s Centre for Environmental Justice, NGO the Environmental Investigation Agency (EIA) and other members of the Clean Shipping Coalition.

“There are currently no legal obligations for a substance or good that is transported at sea if it is not listed in the International Maritime Dangerous Goods (IMDG) Code, and for this to happen they must be classified as hazardous.

“We already know microplastics such as nurdles bioaccumulate, persist for hundreds of years in the environment, and can cause toxicity. There is more than enough evidence to support an IMDG listing for these plastics,” he says.

But rich nations prefer not to get involved…

Last week, at the IMO’s Marine Environmental Protection Committee meeting in London, EIA presented a now 90,000-strong signature petition, calling for nurdles to be classified as hazardous, but there was disbelief, when no time was set aside to discuss the issues associated with nurdles.

Withanage is disappointed with this result. “We are very unhappy about the IMO’s attitude,” he says.

“The government of Sri Lanka was only given two minutes to voice their concerns and demands, and question the IMO on its plans to address future shipping disasters and the proposal to declare nurdles as hazardous substances, before being abruptly cut off.

“There were six people, including myself, listed to speak, but we didn’t, as no time was allocated to us. This makes me feel that while a small nation such as Sri Lanka is suffering from a big disaster, rich industrial nations prefer not to get involved,” he concludes.

Further discussions should take place in March or April next year. Until then, the campaign to classify nurdles as hazardous continues.