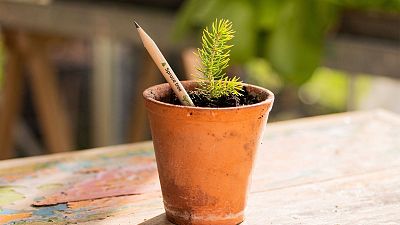 Usually pencils are made out of trees. But one Danish start-up has come up with a new idea: growing trees from pencils.

And these aren't any old trees - these are the Christmas variety.

Sprout produces the world's only plantable pencils. The idea is to make good use of the products, even after they've been sharpened too many times.

The pencils are made from sustainably harvested wood, with a writing core made from 100 per cent natural and non-toxic graphite. Hidden at the end of the pencil, however, is a plant-based capsule filled with seeds.

"Once you're done writing, instead of throwing it out, you simply plant the green capsule, which contains the seeds, and then you take care of it like any other plant," Michael Stausholm, founder of Sprout, tells Euronews Green.

There is a wide variety of seed choices, so you can choose if you want your pencil to become cherry tomatoes for your garden, flowers for your windowsill, or even a Christmas tree!

The company has created a special series of pencils with spruce tree seeds inside. Spruces are mostly known as Christmas trees and can grow and survive in many different climates.

But who uses pencils these days?

We use 14 billion pencils each year around the world, which means 82,000 trees are cut down just to fulfil demand.

But trees are a vital part of fighting climate change and global warming. They store carbon, release oxygen, stabilise the soil, and provide habitats for our planet's wildlife.

So far Sprout, which was created in 2013, has sold more than 30 million pencils in over 80 countries, including the UK, Germany and the United States.

Watch the video above to see how these pencils work.

Are these the thinnest solar panels in the world?