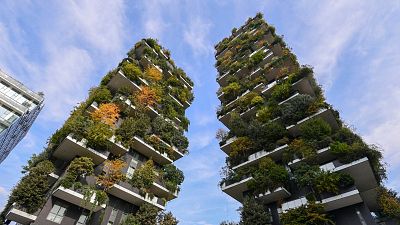 When pressed on his fascination with trees, the architect Stefano Boeri is prone to nostalgia.

​”When I was a kid, I used to quote a novel written by an Italian writer, Italo Calvino, called ‘The Baron in the Trees’. It was the story of a young duke who decided, when he was 12, to abandon his family and spend the rest of his life living on the branch of a forest.”

This analogy might better explain the 64-year-old’s fascination with nature - a life-long fixation which led him to design the world’s first vertical forest.

Building a forest in the sky

Bosco Verticale - a pair of residential towers situated in the heart of the Porta Nuova district of Milan - is home to over 21,000 trees, shrubs and perennial plants.

The vegetation converts an average of 44,000 pounds of carbon each year, while mitigating noise pollution from the street-level traffic below.

They’re also home to 300 non-plant residents - the occupants of the apartments.

But what’s it like to live inside these world-renowned homes?

“People love it so much,” says Boeri, who has welcomed feedback from tenants since the towers first opened in 2014.

“It's absolutely unbelievable the perception you have when you see the skyline of Milano through the filter of the leaves. It's maybe the leaves of a tree that has its roots three floors below you, so it's a really unique experience.”

Milan has gone from drab city to green metropolis

For Boeri, the towers are also a way of reimagining the city of his birth.

“Milan was considered a grey city, industrial, black and white more or less in the 70s and the 80s. So it's really quite new, this amazing explosion of plants.”

Towering high above the city’s skyline, the buildings are now home to 400 apartments and an 11-storey office building.

Upon completion, their design won both the ‘2014 International Highrise Award’ and the ‘2015 Best Tall Building Worldwide’.

And they have now inspired a new generation of urban reforestation projects around the world.

“I try to promote urban forestation because that's what we need," says Boeri, citing the environmental benefits of incorporating nature into architectural projects.

"We have to multiply the number of trees everywhere. And the reasons are very clear. It’s a faster, cheaper and more inclusive way to try to take down global warming.”

Urban reforestation should be available to everyone

Buildings such as these are now “one of the priorities of public policies in major cities,” says Boeri, who recently completed work on the Trudo Vertical Forest social-housing tower in Eindhoven, The Netherlands.

This project allowed Boeri to complete his goal of making urban reforestation accessible to all.

“Everything is rentals, or it's basically for students, young couples, young researchers. It is important to make this affordable for everybody.”

The building contains 125 small apartments intended for low-income households, surrounded by a facade of over 5000 shrubs, plants and trees.

Projects such as this one “allow nature to find spaces where it can express forms of biodiversity,” adds Boeri, whose love of trees is as strong as ever.

“Trees are very generous. They help humans protect themselves from excessive sunlight. They help people to breathe better, because they clean the air and absorb the dust from urban pollution. They produce oxygen and eat co2, which is not bad.”

“But more in general, I think that what they give us is much more than what we give them.”