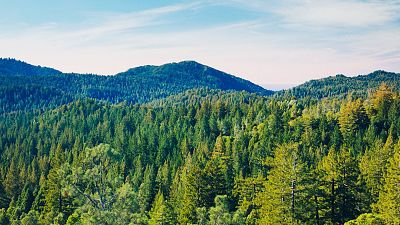 To combat climate change and pollution, Madrid is building a green wall around the city. A 75-kilometre urban forest with nearly half a million new trees

“What we want to do is to improve the air quality in the whole city,” says Mariano Fuentes, Madrid's councillor for the environment and urban development. “To fight the 'heat island' effect that is happening inside the city, to absorb the greenhouse emissions generated by the city, and to connect all the existing forest masses that already exist around the city.”

The project will also make use of derelict sites lying between roads and buildings to help absorb 175,000 tons of CO2 per year.

When finished, Madrid's 'green wall' will be a forest of indigenous trees that can absorb CO2 but also the heat generated by human activity. Temperatures under the shade of these trees are 2 degrees lower than the rest of the city.

It has to be a global strategy, it's not only about cars.

“It has to be a global strategy,” added Fuentes. “It's not only about cars, but also a pedestrianisation strategy, the creation of environmental corridors in every district... and most of all... to engage citizens in this new green culture, it is essential for every city to face the near future in the best conditions.”

With desertification reaching the doorstep of southern Europe, Madrid's urban forest intends to be both a mitigation and adaptation measure to climate change.

“It is not a park,” says architect and city council urban advisor Daniel González. “Because the requirements were that it would use a very little amount of water, planting indigenous trees... and looking for other ways of maintenance. Because at the end of the day an infrastructure this big needs to be preserved with a minimum effort so it can be sustainable over time.”

Cities around the world consume two-thirds of the global energy supply and generate three-quarters of the world's greenhouse emissions.

From restricting traffic to promoting cycling and public transport and to planting more trees or looking for sustainable sources of energy, cities around the globe have already started their transformation. They will be the most affected by climate change, but they are also an essential part of the solution.