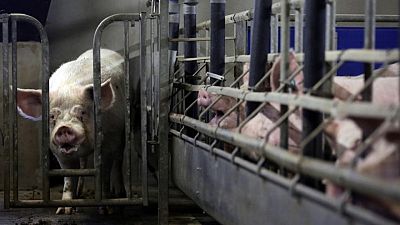 A group of global investors representing more than $3.5 trillion (€3.1 trillion) in assets has urged the European Commission not to allow intensive farming to be labelled as a sustainable activity.

The bloc is in the final stages of defining what activities can be considered climate-friendly, a move it hopes will incentivise more investment to help the region cut its greenhouse gases emissions.

It has been tough, however, to reach political agreement on what activities to include in the "taxonomy", with the nuclear, gas and farming industries all subject to lobbying by countries and trade bodies keen to retain access to finance.

After writing to Commission President Ursula von der Leyen on 5 October, the investor group said it was making its position public. The news came after a leaked paper circulated among EU governments, proposing that a large chunk of agricultural subsidies should be labelled green.

As well as carbon emissions, the letter said intensively reared livestock also had negative impacts on biodiversity, water use, antimicrobial resistance and soil health and "should not be included in the EU Taxonomy as it stands".

The Commission was not immediately available to comment when contacted by Reuters.

"It is critical that the EU Taxonomy only defines as green those sectors that are genuinely environmentally sustainable," said Helena Wright, Policy Director at the FAIRR Initiative, an investor group focused on the risks of intensive farming, which coordinated the letter to the Commission.

It is deeply concerning to see a proposal that would count EU agricultural subsidies as green, when we know that many of these subsidies are harmful.

"It is deeply concerning to see a proposal that would count EU agricultural subsidies as green, when we know that many of these subsidies are harmful," she said.

Farming is a political issue

Farming is responsible for around 10 per cent of the EU's greenhouse gas emissions, yet its role in the EU rules is politically contentious given the large number of people it employs.

The letter was released a day after the European Parliament approved reforms to farming subsidies under the Common Agricultural Policy (CAP) to give more money to smaller farmers using more sustainable farming methods.

Under the new rules, at least 10 per cent of CAP funds will go to smaller farms and all payments would be tied to complying with environmental rules.

Alexander Burr, who leads on environmental, social and governance-related policy issues at Legal & General IM said the taxonomy needed to be science-based.

"It must support the transition to net zero economies, and agriculture is a key but often overlooked sector within this," Burr said.

"In this regard, we encourage the EU not to create potential policy loopholes in the agricultural sector that would weaken and undermine the robustness of the framework."