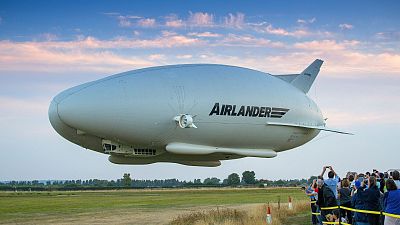 When we think about blimp travel, the Hindenburg disaster is a historic image that is seared into the memory of many people. It’s a source of exasperation for Rebecca Zeitlin when discussing the airships manufactured by Hybrid Air Vehicles (HAV).

“Helium is completely inert. there’s no fire, it’s not explosive unlike hydrogen,” she explains.

“So that solves the Hindenburg problem.”

It’s also inaccurate to describe them as blimps. 60 per cent of the lift for these airships is provided by helium and the rest comes from their aerodynamics as air moves over the hull like a giant wing.

“That gives us the efficiency advantages of lighter than air technology but it solves a lot of the problems,” says Rebecca.

“Like the photographs you see of blimps throughout history where you have 100 guys on ropes trying to hold the thing down.”

Rebecca is based at HAV headquarters in Bedford, UK where she is the head of marketing and communications.

This airship manufacturer is one of the prime movers in what is expected to be a €38 billion market for these low-carbon aircraft. So far they have test-flown a prototype in the US and the UK and their models are expected to increase in size (from 50 to 200 tonnes). The already low carbon emissions are set to decrease further as hydrogen batteries are brought in to replace combustion engines.

“The pressure to decarbonise is greater than ever before which we think is a good thing.”

However, the Hybrid airships are already significantly more fuel-efficient and less polluting than traditional aeroplanes When compared with a kerosene engine, the fuel of choice for a majority of planes, there is a 75 per cent reduction in emissions.

“The pressure to decarbonise is greater than ever before which we think is a good thing,” Rebecca explains.

“The sooner we can get it in service the more quickly we can start taking carbon out of the system.”

French company Euro Airship is another player in this rapidly developing market. It designs rigid airships which can operate in all weathers.

“What we propose is an innovative, eco-friendly, cost-effective air transport solution.”

Euro Airship's goal is sustainable development and the company is working towards zero emissions. Fuel consumption has already been reduced by 80 per cent and there are plans to include hydrogen batteries and a flexible solar panel to go on top of the ships in the future.

Beside more obvious applications in commercial travel and logistics, Euro Airship has also taken part in a study on disaster relief by the European Commission. Marie-Christine says that shows airships could intervene in emergency situations such as flooding, earthquakes, tsunamis and industrial accidents.

They can be used for evacuations - carrying over 200 people per trip - to bring heavy equipment into disaster zones, and even be transformed into a field hospital if needed.

The Commission's study was focused on wildfires, and the results were promising.The company proposes that they can help fight fires through surveillance of the forest floor to prevent outbreaks as well as being brought in to fight fires from above.

The study compared traditional aircrafts to rigid airships and found them to be more efficient.They need no special infrastructure to land, are easier to refuel and can potentially deliver 300 tonnes of water per day - four times that provided by traditional aerial firefighting.

This low-carbon technology could be a welcome solution for EU officials. Even before this summer's disastrous fires across Southern Europe, many were nervously watching developments in Australia and California.

“We can reduce the number of human victims and material damages,” says Marie-Christine.

“We can reduce environmental impact by contributing to the reduction of wildfire damage and burned vegetation and preserve the ecosystem. We can limit damages on natural resources and health too.”

When will these airships take to the skies?

Both Euro Airship and Hybrid Air Vehicles are hoping for a broad appeal for their products. Logistics, tourism, civil and military use are all potential markets.

With no need for a runway, and a 400km range, they claim that airships will make travel much easier and less polluting in terms of both carbon and noise. They can land on any surface, including water, and do not require pressurisation meaning more windows and more space.

HAV are currently in talks with domestic Spanish airline Air Nostrum to create routes between islands and the Spanish mainland. According to Rebecca, the passenger experience will be much more enjoyable- and potentially luxurious.

“Every seat will be a little bit like a business class experience,” she says.

“The whole experience will be more restful.”

Tickets prices will be similar to standard rail fare and routes will be designed around intercity travel. This is often made difficult by land or sea crossings, for example Oslo to Stockholm or Liverpool to Belfast which would be no problem for airships like these.

While both Euro Airship and HAV are still in pre-mass production, they say their ships will be on the market in the next two to four years, and the time couldn’t be more ripe.

Logistics is expected to be HAVs biggest market. The company hopes it can bridge the gap between inefficient air travel and slow long haul shipping by providing an option that is both fast and environmentally friendly.

“The challenge is for all of us to think about what the future of mobility and transport needs to look like in order to be decarbonised,” says Rebecca.

“The reality is it’s not going to look like what it looks like now if we’re going to take decarbonisation seriously.”