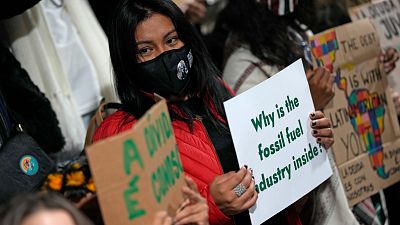 Youth climate activists protest that representatives of the fossil fuel industry have been allowed inside the venue during COP26 in Glasgow, Scotland, November 11, 2021.   -   Copyright  AP Photo   -
By AP with Euronews  •  Updated: 12/11/2021

A new draft of the COP26 cover deal released on Friday appeared to be backing away from a call to end all use of coal and phase out fossil fuel subsidies completely.

The latest draft proposal from the meeting’s chair calls on countries to accelerate "the phaseout of unabated coal power and of inefficient subsidies for fossil fuels."

A previous version published on Wednesday had called on countries to "accelerate the phasing out of coal and subsidies for fossil fuel."

The change in wording suggested a shift away from unconditional demands that some fossil fuel exporting nations have objected to.

The text is still likely to undergo further negotiation at the talks, due to end Friday.

"The key line on phasing out coal and fossil fuel subsidies has been critically weakened, but it’s still there and needs to be strengthened again before this summit closes. That’s going to be a big tussle and one we need to win,"Greenpeace chief Jennifer Morgan.

The question of how to address the continued use of fossil fuels responsible for much of global warming has been one of the key sticking points at COP26.

Scientists agree it is necessary to end their use as soon as possible to meet the 2015 Paris accord's goal of capping global warming at 1.5 degrees Celsius. But explicitly including such a call in the overarching declaration is politically sensitive, including for countries, such as Saudi Arabia, that fear oil and gas may be targeted next.

Another crunch issue is the question of financial aid for poor countries to cope with climate change. Rich nations failed to provide them with $100 billion (€ 86 million) annually by 2020, as agreed, causing considerable anger among developing countries going into the talks.

Negotiators from almost 200 countries gathered in Glasgow on Oct. 31 amid dire warnings from leaders, activists and scientists that not enough is being done to tackle the climate crisis.

The talks in Glasgow will likely be extended If officials are unable to reach an agreement by Friday's official deadline.