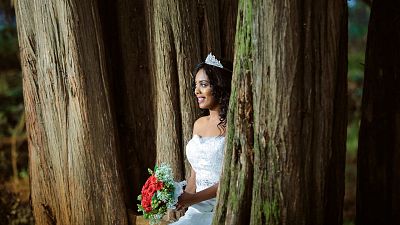 More than 70 women have “married” trees to protest against their deforestation in the UK.

The environmental organisers planned the ceremony in response to a planning application that is set to build 166 apartments where 74 mature trees currently reside in the city of Bristol.

Each bride wore wedding dresses from a number of different cultures in a ceremony performed by a celebrant, according to the BBC.

Even though the marriage is not legally binding, the women are confident they’re making their voices heard in the fight to preserve local nature.

"To get married to a tree is an absolute privilege. It's not just a sentimental gesture, it is highly significant and symbolic,” says campaigner and bride Suzan Hackett, who lives local to the area.

"Trees are pure examples of unconditional love, which fits in so beautifully with the whole idea of marriage. Marriage is for life, breathing is for life.”

Are Bristol’s trees here to stay?

In 2020, the UK lost 4,150 hectares of its natural forests, often to pave the way for private construction.

A battle ensued in this instance when owners of the Baltic Wharf Caravan Site were served notice to leave by Bristol City Council.

Each time this happens an area vulnerable to development opportunities. A planning application from Goram Homes and developers Hill, whose recent turnovers consist of over €470 million, has been submitted to create a series of apartment blocks on the natural land.

The application concedes that some of the trees will need to be removed in order to do this but does not specify how many. What concerns the group the most is the lack of transparency.

For now, the situation remains a waiting game as Bristol City Council take the time to examine the application, which is yet to be approved.

Prof John Tarlton, a professor of regenerative medicine at Bristol Veterinary School, fears that once this is approved there is no going back.

He served as best man at the ceremony and wrote the trees’ “vows.”

"Once the planning application has been approved, it is too late,” he says.

"Nobody is going to reverse that decision. That's it, the trees will go and there is very little we can do about it. We cannot afford to lose these 74 trees. It is an enormous number of mature trees and in a part of Bristol that needs them most."

The wedding honoured a history of female-led environmental protection

The idea of marrying a part of our natural environment has raised skepticism and mockery in some parts of the discourse surrounding this event.

“I really don’t want to be a part of this world anymore. Are there any normal planets around I can go to?” wrote one Twitter user.

But the inspiration for it comes from a rich history of environmental connection and protection.

It set a precedent for future conservation activism in the country. On the flipside, it also implored people to adopt the term “tree hugger” globally as a cruel insult for people invested in environmental causes.

More recently, a group of women in San Jacinto Amilpas, Mexico, held a mass marriage ceremony to raise awareness about illegal logging in the area in 2018.

“Marrying a tree is a way of protesting, to say that we need to stop exterminating Mother Earth every day, every minute, every second,” tree bride Dolores Leycigi said at the time.

The bulk of the country’s wood trade is arranged by crime syndicates which continue to leave its forests affected - a pressing concern to this day when you consider the amount of CO2 absorbed by dense forests across the Gulf.