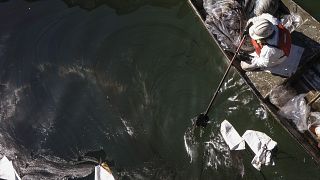 On Monday, the iconic beaches of the southern California coast have reopened following a devastating oil spill that stained the shoreline earlier this month.

It is believed that the incident is the result of a ship anchor dragging and damaging a pipeline belonging to Amplify Energy, which then leaked between 95,000 and 500,000 litres of crude oil into the ocean.

Advocates say they're concerned about the long-term impacts of the spill.

Despite the quick response, some oil was able to make its way into the local wetlands before crews could work to keep oil out of ecologically sensitive areas with sand berms and floating booms.

Built-up terraces of sand called sand berms are used to cut off waterways to prevent the oil slick from entering protected areas while floating booms skim the water's surface to collect crude oil that has collected in large patches.

The environmental impact on sensitive wetland habitats has been less severe than initially feared, but advocates say they're concerned about the long-term impacts of the spill.

It is believed that the incident is the result of a ship anchor dragging and damaging a pipeline.

Over the past week, large teams of workers have been cleaning up beaches in what has turned out to be one of the worst oil spills in recent California history.

After water quality tests revealed no detectable levels of oil-associated toxins in the ocean, officials decided to reopen the shoreline in Huntington Beach and nearby Newport Beach.

Despite the damage to local wildlife and ecology, the clean-up effort has been considered a success and this Monday, Huntington Beach’s reopening has come earlier than expected.

The swift recovery and reopening of beaches is welcomed by local shop owners, who have taken an economic hit since the spill and are hoping that business will bounce back quickly.