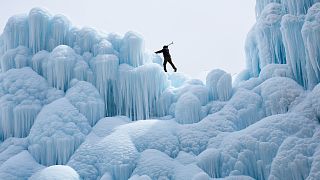 In northern India’s Ladakh desert, farmers are turning excess stream water into artificial glaciers, so that water can be accessed when supplies are scarce in drier months.

Greg White’s photo series, 'Stupa', shows us the inner workings of this artificial glacier system, called an Ice Stupa, which is used by Kashmiri farmers in the region.

The idea is simple and requires no pumps or power, instead relying on the physics of water and the natural progression of the seasons.

An Ice Stupa is built using winter water - which would otherwise go unused - and storing it in conical shaped ice heaps in the mountains above the Ladakh desert plateau.

In the summer months, which are especially dry, these Ice Stupas slowly melt and release water to the farmers downstream.

In recent years, climate change has meant hotter summers, which has lead to faster glacial melting. This means water is more scarce in the spring season, impacting agriculture and food supplies in the region.

climate change has meant hotter summers, which has lead to faster glacial melting

The Ice Stupa project was developed by the Indian engineer and innovator Sonam Wangchuk in the winter of 2014. This two-storey prototype stored roughly 150,000 litres of winter stream water.

The idea was to find a solution to the water crisis being faced by the farmers of Ladakh in the critical planting months of April and May, before the natural glacial meltwaters start flowing.

'Stupa' will be open to the public when the series is exhibited with other winning works at the Px3 Paris Photo Prize exhibition.

This runs from October 25 to October 31 at Espace Beaurepaire in Paris.