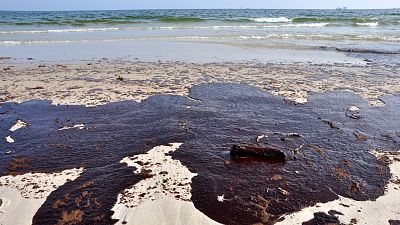 A new ‘smart sponge’ designed to clean up oil spills in the ocean has been developed at Northwestern University, Illinois in the U.S.

The sponge is described as highly porous and works by selectively soaking up oil, sparing both water and wildlife. It can absorb over 30 times its weight in oil and then be reused up to several dozen times afterwards.

The secret to the sponge lies in its oleophilic, hydrophobic, magnetic (OHM) nanocomposite coating. This chemical coating allows oil to be extracted from water with ease, meaning the process can turn any regular, cheap sponge into a smart sponge.

Vikas Nandwana, a Research Associate at Northwestern University, describes how they plan to use the sponges. They will come in “sponge sheets” which are wrapped into rolls. There is no limitation in size but, “typically, 2-3 feet width is enough,” he says. The sheets can be employed in many ways. Most commonly, they would be applied like ‘sorbent pads’ (absorbent pads used to cover beaches after an oil spill) but they can also be airdropped in to soak up oil from the sea.

“Oil spills have devastating and immediate effects on the environment, human health and economy,” says Nandwana’s colleague Vinayak Dravid, who led the research. “Although many spills are small and may not make the evening news, they are still profoundly invasive to the ecosystem and surrounding community.

“Our sponge can remediate these spills in a more economic, efficient and eco-friendly manner than any of the current state-of-the-art solutions,” he says.

At sea, oil spills are extremely dangerous, more so than those on land. They can spread for hundreds of nautical miles and form a thin coating which covers beaches. Seabirds, mammals or shellfish touched by the oil can subsequently die from swallowing it.

The oil also clogs the blowholes of whales and dolphins, so they can’t breathe, and coats the feathers of birds so they can’t fly and die from overheating.

What’s more, long-term ecological effects may be worse. According to Water Encyclopedia, oil waste poisons the sensitive marine and coastal organic surfaces, “interrupting the food chain on which fish and sea creatures depend.”

The Deepwater Horizon oil spill, often referred to as the BP oil spill, occurred in the Gulf of Mexico on 20th April 2010. It was the largest marine oil spill in the history of the petroleum industry. At the time, the U.S. federal government estimated the total oil discharge was up to 4.9 million barrels and, as such, the event is widely considered to be the one of the most damaging environmental disasters in American history.

A huge response ensued to protect beaches, wetlands and estuaries from the spreading oil, but many marine and wildlife habitats were completely destroyed. Fishing and tourism industries were also adversely affected as the spill lasted several months. Clean-up crews were still working to manage the effects of the spill three years later in 2013.

In the American state of Louisiana, one of the worst coastlines impacted by the spill, oil clean-up crews worked four days a week on 55 miles (89 km) throughout the whole year.

In Mexico City, activists covered their bodies with black paint in protest against the oil spill.

But who was held accountable for the oil spill? In September 2014, a U.S. District Court judge ruled that BP was primarily responsible, citing gross negligence and reckless conduct. The following year, in July 2015, BP agreed to pay $18.7 billion (€16.7 billion) in fines, which was the largest corporate settlement in American history.

Fortunately, over the last 50 years, the number of marine oil spills from tankers has steadily decreased, showing a downward spike over the decades. Since 2010, the average has been 1.8 per year, according to data by ITOPF.