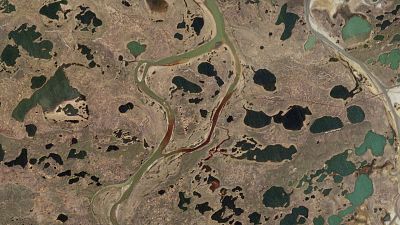 A court has ruled that the energy company responsible for Russia’s catastrophic 2020 oil spill should pay 146 billion roubles (€1.6 billion) for damages to the Arctic.

Last May’s spill unleashed 21,000 tonnes of diesel into rivers near Norilsk, one of the nation’s northernmost cities. An ageing reservoir at one of the company's facilities collapsed and the resulting leak went on to affect 12km of water.

Its impact was visible from space, as intelligence cameras captured images of water passages dyed red from contaminated soil.

Mining titan Nornickel has disputed the compensation figure, contesting that the damages caused were calculated at 21 billion rubles (€234 million).

A report commissioned by the company by Environmental Resources Management (ERM) concluded the disaster was “inevitable” due to flaws in their tanks.

Company owner and Russia’s richest man assessed the cleanup would cost about 10 billion rubles (€111 million) and vowed to spend "whatever is needed" at the time.

This proved short term, as Nornickel filed a claim for an 85 per cent reduction in the compensation required, which the Krasnoyarsk Arbitration Court has now dismissed.

The fine will amount to 98.5% of the company’s total profits last year.

Criminal proceedings were launched by Russian Investigative Committee (SK) over the pollution , citing negligence as there was an alleged two-day delay in telling government bodies the spill had happened.

Russia’s Minister for Emergencies Yevgeny Zinichev told Vladimir Putin that the company delayed notice in an attempt to “contain” the spill.

President Putin was reportedly furious at the time and immediately declared a state of emergency.

He doubled down on this last month, saying Nornickel “has to answer for what has been done.”

The implications on future spills

Significant progress has been made on solutions for oil spills, but adequate financial consequences remain the most effective deterrent to ensure corporate competence.

"This court ruling is a precedent in many ways that can help to truly address environmental issues at a systemic level”, says Elena Sakirko of Greenpeace Russia.

Polluting companies, you need to clean up your act AND pay up for the damage you’ve caused.

People — and the courts — will not stand for environmental destruction.#Norislk#Russia#Nornickelhttps://t.co/vbsjGoFOP1

Greenpeace has compared the incident to the 1989 Exxon Valdez oil spill, where a tanker released 37,000 tonnes into Alaskan waters over several days. Many animal habitats were said to be severely affected.

CNN Russia journalist Mary Ilyushina also weighed in on the groundbreaking ruling, saying it “probably wouldn’t have been possible if not for the people working there who risked to expose the scale of damages.”