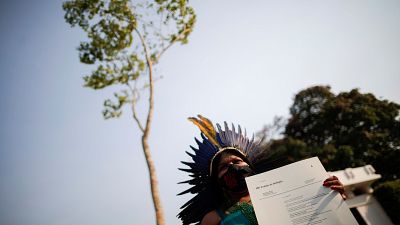 A Jatoba tree, originally from the Amazon, is placed in front of the Norwegian Embassy.   -   Copyright  UESLEI MARCELINO/REUTERS
By Doloresz Katanich  with Reuters & AP & AFP  •  Updated: 22/09/2021

A group of Indigenous activists arrived at the Norwegian embassy in Brasilia, Brazil on Tuesday, to seek refugee status for a Jatoba tree.

Originally from the Amazon, the tree was brought to the Embassy as part of a symbolic protest on behalf of the indigenous umbrella group, The Articulation of Indigenous Peoples of Brazil (APIB). Norway is the first country in the world that has banned deforestation, which stands in stark contrast to the policies of Brazil’s own government.

The Jatoba, sometimes referred to as Brazilian Cherry due to its burgundy-coloured hardwood, grows in the Amazon and other biomes of South America. The sap of this tall canopy tree is used for medicinal purposes by indigenous people.

When delivering the tree, APIB leader Sonia Guajajara pleaded for help to save the Amazon rainforest.

Bolsonaro has been widely criticised for his willingness to open more of the Amazon rainforest to mining and agriculture. He said to the UN General Assembly that ”in the Amazon, deforestation was reduced by 32 per cent in August in comparison with August of the previous year.”

A recent report shows, however, that deforestation in the Brazilian Amazon has hit the highest annual level in a decade. Between August 2020 and July 2021, the rainforest lost more than 10,00 square kilometres of trees.

Watch the video above to see the protest.