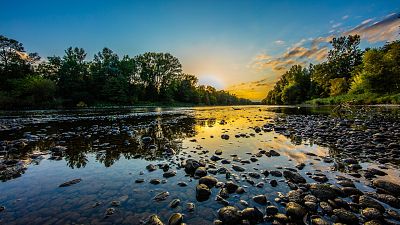 UNESCO has designated the world’s first biosphere to span across five different countries - and they’re all in Europe.

The new biosphere reserve covers an area of 700km and includes parts of Austria, Slovenia, Croatia, Hungary and Serbia. The basis of the biosphere is a route along the Mura, Drava and Danube rivers that wind through these five European nations.

Dubbed the ‘Amazon of Europe’, the biosphere is precedent-setting as a multinational effort to curb ecological destruction. It is the largest river-based protected area in the entirety of Europe.

What is a biosphere and why is it important?

Biospheres are crucial for ecological restoration as their UNESCO protected status ensures an area’s biodiversity and ecological structures, like floodplains, are protected from outside destructive interests.

The Mura, Drava and Danube biosphere will protect floodplains, forests, sand and gravel banks, steep banks, and backwaters. It will also look after a huge number of animal species, including the highest density of breeding white-tailed eagles in continental Europe.

Why was this biosphere created?

The five countries involved in the biosphere have worked for a long time to receive the UNESCO designation.

The process began in 2009 when the governments of Croatia and Hungary signed a joint declaration committing to the protection of a cross-border biosphere reserve.

All five countries’ environmental ministers then made a joint declaration in favour of the reserve in 2011. Following this, each of the country’s parts of the rivers involved received biosphere reserve status. First Croatia and Hungary in 2012, with Serbia, Slovenia, and Austria joining in 2017, 2018, and 2019 respectively.

The decision to protect the ‘Amazon of Europe’ is a beacon of hope that should be replicated across the continent.

“In its biodiversity strategy, the EU pledged to protect 30 per cent of EU land and seas by 2030. The creation of the Mura-Drava-Danube reserve is in line with the ambition of the EU Green Deal,” says Claire Baffert, Senior Water Policy Officer at WWF European Policy Office.

“The decision to protect the ‘Amazon of Europe’ is a beacon of hope that should be replicated across the continent.”

“The five countries involved prove that nature conservation can overcome country borders for the benefit of everyone. In the context of the current climate crisis and massive species extinction, protecting the last natural areas has become a matter of our survival,” said WWF project coordinator Arno Mohl after the submission to UNESCO in 2020.

Are there more biospheres in the EU and beyond?

This biosphere is a success of EU coordination and will go some way to reversing the damage to floodplains in the region.

Rivers and animal species do not know borders.

“The Mura hosts the richest fish diversity in Slovenia, including 36 species on the IUCN Red List of Threatened Species of fish. It stems from the fact that the Mura is the only river system in Slovenia that is not divided into various sections by dams. Fish can migrate freely from the Danube, all the way to Spielfeld on the Austrian border. In the core zone of the biosphere reserve, the measures will include restoring degraded river stretches and floodplain areas that will improve even more fish migration.

“Many precious ecosystems spread across the Mura-Drava-Danube Biosphere Reserve. Protecting and restoring them needs to be done on a transnational level,” she adds.

Restoration is especially vital as Europe has degraded up to 90 per cent of its floodplains, Eva Hernandez, Living European Rivers lead at WWF explains.

“The European Commission needs to ensure that the upcoming Nature Restoration Law establishes ambitious binding restoration goals for these habitats, so they can display their full potential, for the benefit of both nature and people,” Hernandez says.

The biosphere will contribute to the EU’s Green New Deal. This is the commission’s proposed method of transforming the EU’s economy to get to no net emissions of greenhouse gases by 2050. It also promises to move away from creating economic growth through the use of non-sustainable resources.

Outside of the EU, there are many other biospheres that could benefit from a similar UNESCO status.

Other transboundary biospheres include the Vosges du Nord/Pfälzerwald region across France and Germany. Originally receiving its designation in 1998, the area shares water, sandstone and forests.

There are also two intercontinental biospheres. Stretching across parts of Europe and Africa is a single biosphere of the Tingitane Peninsula in Morocco and the southern Iberian Peninsula of Andalusia.

Designated in 2017, the Great Altay Transboundary Biosphere Reserve also stretches from Kazakhstan in Asia to Russia in Europe.

But there are many key biospheres that need more attention, Baffert says.

WWF’s recent report 'World's top 10 rivers at risk' recognised the top ten major rivers that either already suffered most grievously under the weight of these threats or are bracing for the heaviest impacts.

“Those are examples of rivers that urgently need to be better protected and would benefit from a similar approach,” Baffert says.

“The 5-country Biosphere Reserve is an essential contribution to the implementation of the EU biodiversity strategy. But, we'll need many more international reserves if we want to achieve that goal,” she concludes.