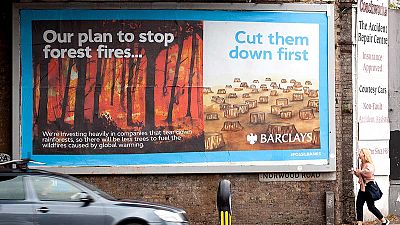 If you catch a bus in the UK today, you may come across a slightly unorthodox advert.

At first glance, it appears to be a poster for one of the biggest banks in the world. Look a little closer though, and you’ll see it’s something quite different.

The satirical artwork takes aim at Barclays’ investment in companies and projects damaging the planet, while claiming to be environmentally friendly.

One poster reads: “Drilling our way to Net Zero” over an image of an Arctic oil rig.

Barclays has recently pledged to become a ‘net-zero bank’ by 2050, but in 2021 alone the bank has already granted €3.75 billion in loans and bonds to fossil fuel companies.

The bank is also linked with industrial meat companies like Brazil-based JBS, the largest meat processing company in the world, which is heavily linked with the deforestation of the Amazon rainforest.

The hijacked billboards aim to highlight the clash between Barclays’ promises to ‘go green’ and its actions.

“The posters showcase the environmental impacts we don’t see in Barclays’ own adverts: the deforestation, the ocean drilling, the oil spills, the wildfires, the threat to wildlife,” says Tom Merriman from Brandalism.

“They’re a corrective, right of reply to the greenwash messaging of Europe’s dirtiest bank.”

Barclays is the biggest financier of fossil fuels in Europe. The bank loaned more money to polluting companies than any of its European competitors last year.

In May this year, the International Energy Agency (IEA) published findings on how to reach net-zero carbon emissions by 2050. The report states that even if all current government pledges are met, we will not be close to keeping global temperature rises to 1.5°C.

“The scale and speed of the efforts demanded by this critical and formidable goal – our best chance of tackling climate change and limiting global warming to 1.5°C – make this perhaps the greatest challenge humankind has ever faced,” says Fatih Birol, the IEA Executive Director.

The paper makes clear that in order to come close to the Paris Agreement target of 1.5°C, all investment in and expansion of fossil fuel projects must stop.

In order for Barclays to reach its goal of being a ‘net-zero bank’ by 2050, it needs to cease financing coal, oil and gas companies. Barclays did not respond to a request for comment.

"Ahead of COP26, banks like Barclays will tell the world how much they’re investing in renewables,” says Merriman.

“But what's more significant is how much they continue to pour into fossil fuels. Put simply, it’s not enough to fund the good stuff, they’ve also got to stop funding the bad stuff.”

The posters have been designed by 11 artists working with Brandalism. The anonymous creative network has previously taken aim at polluting car companies and other major, international brands to highlight their damage to the planet.

“Intervening into ad spaces that usually celebrate consumption, the group use ‘subvertising’ as a lens through which we can view the social and environmental injustices that capitalism creates,” says a spokesperson for Brandalism.

UN warns of record greenhouse gas levels ahead of COP26