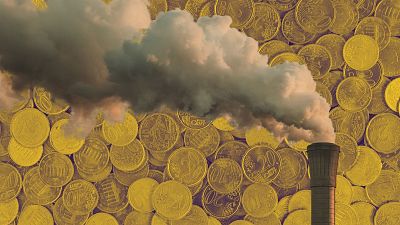 Storebrand has sold its stock in companies involved in lobbying against climate policy.   -   Copyright  Pixabay & Unsplash
By Rosie Frost  •  Updated: 28/08/2020

A Norwegian private money management company worth more than €75m has sold its stocks in some of the world’s largest oil companies involved in lobbying against climate action.

Lysaker-based Storebrand says it has divested from oil giants like ExxonMobil and Chevron because they have been using their political power to block climate policies.

As the largest private asset manager in Norway, Storebrand invests money on behalf of individuals or families to create a financial portfolio for things like personal savings and insurance policies. The company’s new climate policy involves shifting away from “the highest emitters of greenhouse gas emissions” and instead investing in companies that provide “solutions to the climate crisis”.

Storebrand has also dropped 22 other energy companies that get more than five per cent of their revenue from carbon-intensive coal or oil sands.

“We are not only vulnerable to the systemic disruptions that climate change will unleash on ecosystems, societies, and our own portfolio companies,” said Storebrand CEO Jan Erik Saugestad. “We also have a key role to play in accelerating the de-carbonization of the global economy.”

Global recovery from COVID-19 marks an opportunity to bring the company’s investments in line with the UN’s Paris agreement and sustainable development goals, he added.

Despite doing more for the climate than US oil giants, Saugestad said that European oil companies like BP and Shell cannot “rest easy and continue with business as usual”.

The “Exxons and Chevrons of the world are holding us back,” Saugestad told the Guardian.

Lobbyists from Exxonmobile met with European Commission officials last year in an attempt to influence the European Green Deal, according to non-profit InfluenceMap. Notes from the meeting, obtained via a Freedom of Information request, showed that the company pushed the EU Commission to water down strict CO2 emissions limits on vehicles.

InfluenceMap believes that this intervention was intended to slow down a push towards electric vehicles. The non-profit tracks climate lobbying around the world and found that five of the largest oil companies had together spent around €168m per year trying to delay, block or control policies meant to tackle the climate emergency.

Allegedly, BP spent the most money and successfully managed to weaken a landmark environmental law in the US. It meant that new projects like oil pipelines and power stations now require a less stringent review of their environmental impact.

As part of an ambitious set of climate targets released earlier this year, BP claims to be reviewing its connections to lobbying groups. Alongside plans to become a “net-zero emissions operation,” it has so far cut ties with several lobbying groups because of their climate-related activities.