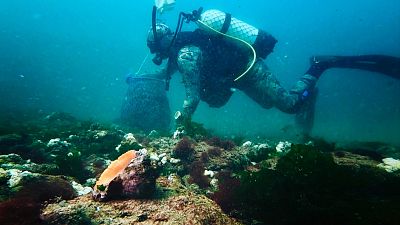 In the quiet Bulgarian village of Krapets on the coast of the Black Sea fishing is a common job. But this summer, the locals are fishing with diving gear.

Nelko Yordanov, a diver and manager of FLAG Shabla-Kavarna-Balchik, an action group backed by the EU that helps local fisheries develop sustainably, took us to take a look at this new kind of fishing there.

Fishing is part of this region's economy and culture and it has gone through a big change. You don't have to dive deep to see it.

The shallows of the Black Sea are covered with sea snails called Veined Rapa whelk. This western Pacific species invaded this area a few decades ago and exploded in number, devouring water-filtering molluscs. Scientists were alarmed, but fishermen saw an opportunity: a short catching season can provide income to them for a whole year.

Nelko tells us that the price you can get for Rapa whelks is quite good. A kilo can fetch around 50 cents. "In good weather, an average diver can collect between 500 to 600 kilograms a day", he adds.

Rapa whelks spread throughout the Black Sea, helped by rising temperatures, low salinity and the absence of local predators. Today, they have become one of its top commercial species. They're fished close to sustainable limits not just by small boats that account for more than 90% of the Black Sea's fishing fleet, but also by industrial vessels.

The explosive growth of Black Sea Rapa whelk populations in recent decades has given rise to a multi-million euro catch and processing market. Every year, Bulgaria and Romania, and other riparian countries, export hundreds of tons of frozen Rapa meat mainly to South Korea and Japan.

Elitsa Petrova is the Director of the Institute of Fish Resources, the oldest maritime institute in Varna. She explains that Rapa whelks are an invasive species but they are also an economic resource. She believes that they should be "jointly managed by the General Fisheries Commission for the Mediterranean and by Black Sea countries using a holistic approach".

Hüseyin Ozbilgin, coordinator at the BlackSea4Fish project, says the study has brought six Black Sea countries together to use the same methods and techniques to process and analyse data. The results have allowed them to know "where the data is coming from, how the Rapa has been distributed, and where are the large ones and where are the juveniles."

The Elekta factory in Varna is just one of several in frozen Rapa mean produces in Bulgaria. It employs about 130 workers, the majority of which are women. Its owner and CEO, Lyubov Georgieva, tells us that the factory offers low-skilled workers the opportunity to make a fair a decent wage.

The blue economy of the Black Sea faces many challenges like small numbers of commercial stocks, complicated environment and weather, and illegal and excessive fishing. But the GFCM has seen an opportunity to foster sustainable economic growth in marine farming here.

Konstantin Petrov, the GFCM Sub-regional Coordinator for the Black Sea, tells us that "the aquaculture industry was a little bit skeptically approached back in the years, but now there are already two aquaculture demonstrative centres that were established around the Black Sea". One of them is in Romania, the other one is in Turkey and there will shortly be another one in Bulgaria. He believes that they could give fishermen the opportunity to diversify their activities and to increase their businesses.

Neighbouring Romania is well acquainted with fish farming, but growing mussels at sea has faced many barriers, like inadequate regulation and lack of knowledge. However, this is now changing thanks to the work of the Aquaculture Demonstration Center (ADC) in Constanta.

Victor Niţă, the Executive director of ADC in Constanta, explains that since 2020, the Romanian waters of the Black Sea have been microbiologically classified. He tells us that their job at the centre is to bridge the gap between the authorities, investors and scientists, so that they work together and are on the same page "because public safety is a very important issue."

Since confirming that the Romanian waters meet EU aquaculture standards, the ADC now advises and trains entrepreneurs who want to start their shellfish-growing businesses. There are many things to learn, like how to check for pathogenic bacteria.

Aurelia Țoț oiu is a Pathologist and a Researcher in Ecology and Marine Biology at the National Institute for Marine Research and Development (NIMRD). She highlights that it's very important farmers are aware of the importance of analyses, "mussels intended for consumption must be properly monitored and regularly checked in a lab."

Matei Datcu, a local fisherman took us to his emerging mussel farm near a tourist hotspot where he owns a seafood restaurant. He expects that with the ADC’s support, marine farming will help diversify his business. In just a few months, the ropes of his farm will be covered with mussels ready to be harvested.

Currently, he is only looking to use the produce of his farm for his own restaurant, but in the future, he thinks he'll be able to supply others.

Across the border in Bulgaria, dozens of companies have made a convincing business case for Black Sea aquaculture.

Dalboka is a seaside restaurant created by Veselin Prokopiev, one of Bulgaria's marine aquaculture pioneers. Its specialty is self-farmed mussels. They sell mussels of all kinds: vegetable stuffed mussels, spicy sauce mussels, cheese and mushroom mussels and even sweet mussels filled with apple sauce and pumpkin.

Many Black Sea residents aren’t used to eating shellfish, but they are becoming more popular. In an average year, Dalboka alone serves 650 tons of mussels from a marine farm just few hundred meters away.

The new seafood industries developing around Rapa whelks and marine aquaculture can promote the sustainable use of Black Sea resources and give a much-needed boost to coastal economies.