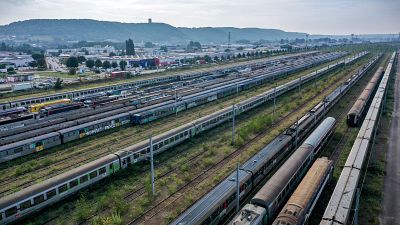 This French railway company is recycling its rusty old locomotives after 40 years of neglect.

Stretching for over 10 kilometres, the train graveyard near Rouen is home to over 400 abandoned train carriages. Covered in graffiti and rust, the site which is managed by national company SNCF, has been a local eyesore for years."It could cause heartache for the railway workers to see these locomotives parked for a long time", says the director of the centre, Jérémie Pigeaud.

Having stored around 5,000 unused rail cars in 10 different locations in the country, SNCF has recently put an end to this practice. Turning its train graveyards into an important source of recycled materials.

"Before sending our trains to be dismantled, we recover all our components which can be reused on other trains", says the Director-General of Equipment at SNCF, Xavier Ouin.

"The first essential step when dismantling these trains is to remove asbestos and decontaminate them", media relations director Céline Pasqualini tells Euronews Green.

Once the hazardous products are removed, all the metal pieces get fully recycled (this represents 81 per cent of the carriage). The wood and glass can either be reused in other models or recycled.

"The non-hazardous waste such as porcelain, resins and glass fibres left at the end represents 6-7 per cent of the rail cars", says Pasqualini.

Watch the video above to see the trains get a second life.

Would you take the train on holiday for extra days off?