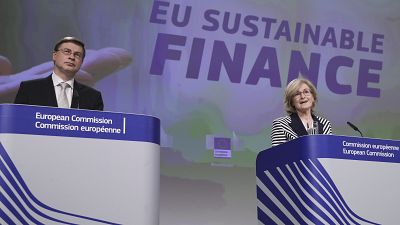 The European Commission has unveiled new plans to galvanise the private sector to invest in sustainable projects and help governments finance the green transition.

The new financial strategy, which includes a regulation to set up a "gold standard" for green bonds, comes mere days before the executive is scheduled to present a huge legislative package to enable the European Union to cut greenhouse gas emissions by at least 55% by the end of this decade.

The Commission is well aware of the hefty price that this goal entails and, despite setting a minimum target of 37% for green investments in its €750-billion recovery fund, much more money is needed.

"Over this decade, we estimate that Europe will need around €350 billion euros of annual extra investment to meet its 2030 emissions target in energy systems alone. This is in addition to around €130 billion it will need for other environmental goals," said EU Commission Executive Vice-President Dombrovskis.

"We have known for a long time that public money will not be enough. And we have to rely on the private sector. This is why sustainable finance is so important: to generate investment at the scale needed."

The main element of the new strategy is a draft regulation that would establish a voluntary European Green Bond Standard (EUGBS). According to the Commission, this proposal will create a "high-quality voluntary standard" available to all issuers, both public and private, inside and outside the EU, to help raise funds on capital markets that would be directed towards sustainable investments.

The "gold standard" will ensure that the projects financed by green bonds will be actually sustainable and avoid the so-called greenwashing, a common misleading practice that advertises products and services as eco-friendly when, in fact, they are not.

Fears of greenwashing inside the European Union have increased in recent years as the bloc's €1.07 trillion multi-annual budget, powered by the recovery fund, boosts the circulation of EU funds across the continent.

The money raised by the green bonds under the EUGBS system will have to benefit investment projects that comply with the EU taxonomy, a technical rule book that identifies economic activities that are in line with the Paris Agreement.

The taxonomy splits projects in two main categories: "sustainable", like hydrogen, solar power and bioenergy, and those that cause "significant harm" to the environment, like coal and lignite. The criteria cover sectors which are responsible for almost 80% of direct greenhouse gas emissions in Europe.

Controversially, the Commission has delayed a decision to include in the taxonomy gas and nuclear energy due to profound disagreements between EU countries.

Although nuclear energy does not produce greenhouse gas emissions, its waste is considered environmentally damaging. Electricity generation from nuclear plants in the EU has decreased over the last decade, but still represented 26.4% in 2019.

Earlier this week, a group of five governments (Austria, Denmark, Germany, Luxembourg and Spain) sent a letter to the Commission arguing that nuclear energy must be kept out of the EU taxonomy because it is incompatible with the "do not significant harm" principle.

On the other side of the table, France is leading the charge in favour of labelling nuclear as green, while Poland, Slovakia and Hungary have all plans to invest heavily in the sector.

The exclusion of both gas and nuclear was harshly criticised by green activities, who have for years campaigned to phase out these two sources of energy.

The Commission's new financial strategy has one clear objective: make the EU the global leader of green finance. Green bond issuance worldwide surpassed €850 billion in 2020 and the market keeps growing as more and more nations around the world commit to climate neutrality.

The executive is currently raising money on the capital markets to finance the €750-billion recovery fund and intends to obtain 30% of this cash through the issuance of green bonds.

"About half of global issuance last year, took place in the European Union – and about half of green bonds are denominated in euros, making it the most popular currency for green bonds," said Mairead McGuinness, European Commissioner for financial services, who unveiled the package next to Dombrovskis.

"But we believe we can do more to support green bonds, which only represent 2 to 4 per cent of the overall bond market."

For Paul Tang, a Dutch MEP who chairs the European Parliament's subcommittee on tax matters, the Commission's plans are necessary to bring on board the private sector within the green transition and reduce the costs associated with sustainable investments.

"I very much hope that even a voluntary standard will help to very much improve the market as a great interest in sustainable investment projects. Meaning that once you have passed the test and acquired the rating of green-bond standard, that finance will be cheaper."

The Association for Financial Markets in Europe (AFME), which represents Europe's Europe’s wholesale financial markets, and SME United, which lobbies on behalf of small and medium enterprises, welcomed the new proposal, praising its "sensible approach".

But Transport & Environment's (T&E), an organisation that promotes zero-emission mobility, was highly critical, warning that the new standard will arrive too late and miss the recovery fund's roll-out. Like any other EU regulation, the draft text will have to be discussed and approved by the EU Council and the European Parliament, a complex inter-institutional process that can drag for years.

"The new EU standard for Green Bonds would be great news if it was based on a rock-solid taxonomy and was used to green the spending in the EU recovery plan. Unfortunately, the taxonomy is under attack and the standard will not be ready in time to influence the recovery money," said Luca Bonaccorsi, director of sustainable finance at T&E, in a statement.

For its part, Greenpeace EU used a photograph of the massive fire caused by a leak in an underwater gas pipe in the Gulf of Mexico to push against the inclusion of gas in the EU taxonomy.

Negotiations around the green bond standard will inevitably be influenced by the ongoing debate on whether gas and nuclear energy should be labelled as "sustainable" in the EU taxonomy. For environmental organisations, the outcome of this discussion will be crucial for the bloc's credibility as an international green leader.

“We are highly concerned that the Commission could potentially include fossil gas in the green taxonomy. This is going against the recent International Energy Agency Net Zero report, which says that there is no room for new gas to reach the 1.5°C target," said Sébastien Godinot, economist at WWF European Policy Office.

"This would be a heavy blow to the credibility of the EU taxonomy, the EU Green Deal and the EU’s global climate leadership."

EU to press on with legal case against Hungary despite referendum