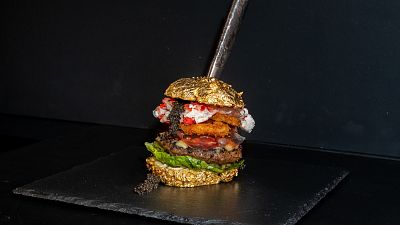 With concerns - and sea levels - rising due to climate change, everyone is looking for a way to reduce their carbon footprint.

But even though you try to fly less or buy more ethically, every now and then it can be difficult to resist a treat - and what bigger treat could there be than the world’s most expensive burger?

Over the pandemic, Netherlands-based restaurant ‘de Daltons’ has developed a burger that costs a whopping €5000 and hopes that the costly dish will break a world record.

The restaurant owner, Robbert Jan de Veen, set out to beat the current record holders when food competitions were cancelled due to COVID-19.

“Breaking a world record has been a childhood dream of mine and it feels amazing,” says Robbert Jan.

“I thought, I can do better than that,” says Robbert Jan, “Even though this burger is extremely costly, you should still use your hands because that’s the only way to eat a burger.”

Are there more environmentally friendly ways to have a burger?

De Daltons' bank-breaking burger is luxurious but may seem a little too much in terms of price, taste and environmental cost.

Made with the finest Japanese Wagyu beef it is certainly a cut above your average happy meal but, increasingly, Europeans are turning away from meat altogether.

In 2018 5 per cent of Europeans were found to be vegetarian, with the highest number being in Italy and the UK, meanwhile the number of vegans in Europe doubled between 2016 and 2020.

The concerns of these non-meat eaters are well placed, with researchers confirming that livestock contributes 14.5 per cent of all anthropogenic greenhouse gases. Making a conscious reduction in red meat consumption could also bring down greenhouse gas emissions by 15 - 35 per cent by 2050.

Some take these estimations even further. Faye Lewis of vegan charity Viva! says,

”Going vegan is the single biggest thing you can do for the animals, yourself and the planet. If we all went vegan, the world's food-related emissions would drop by 70 per cent by 2050.

“Our planet is in the midst of an environmental crisis, and we have a very simple solution."

The very effects of meat consumption could threaten the ingredients in de Dalton’s burger - beluga whales, for example, would be under threat as their natural habitat is sinking in the Arctic.

Ok so we know that most people aren’t going to be eating a €5000 burger, and we also know that not everyone wants to switch to an all vegetable diet, but is there a happy medium?

Fake meat is growing in popularity, with Europeans making up 39 per cent of global sales.

With this in mind we’ve sourced five of the best fake-meat burgers that are available in European restaurants; they won’t cost the planet and they definitely won’t cost you as much as €5000.

Vegan Love serves vegan street food to the climate-conscious residents (and tourists) of Budapest. Their menu ranges from pizza to meatballs but we recommend their most classic Plant Revolt.

A vegan patty stacked with salad and gherkins gives you the classic burger combo at a reasonable price.

This vegan chain is dotted all over Poland so you can pick up their plant-based goodies from Gdansk to Poznan.

Our recommendation is the Tofex which is made from a marinated base of baked Seitan flavoured with spices.

Hank burger can be found in Lyon and boasts a menu as green as the Euronews head office, which is coincidentally also in Lyon.

The Wrestler has a fake-meat patty slathered in mustard sauce and topped off with greenery, perfect for any Euronews employees on the go.

Found in the backstreets of Manchester’s fashionable Northern Quarter, V Rev boasts a wide menu of fake-meat treats for every vegan taste palette.

Our top pick is the Johnny Nashville, a fake chicken seitan burger smothered in ranch sauce.

For Berliners the only option is the 100 per cent vegan menu at Lia’s Kitchen.

The chicken cheeseburger is delicious, made of seitan strips, ‘feta’ and roasted peppers. It is perfect for a refuel after a night at Berghain.

Artificial intelligence could stop millions from going hungry by 2030