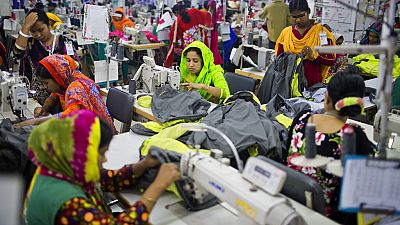 "From Bangladesh to Leicester, the fashion industry is built upon mass exploitation."   -   Copyright  A.M. Ahad/Copyright 2018 The Associated Press. All rights reserved.
The opinions expressed in this article are those of the author and do not represent in any way the editorial position of Euronews.
By Frankie Leach  •  Updated: 28/07/2020

Frankie Leach is a freelance journalist focusing on fashion and politics. Here, Frankie gives her opinion on the Leicester sweatshop scandal.

This week, an investigation into sweatshops in Leicester shed an unwelcome light onto the UK’s dark relationship with fast fashion.

Companies like Boohoo, who are one of the most successful brands on the market, have been using factories in Leicester to produce their cheap clothing for years. But for the most part, British consumers seem to imagine their clothes are made (albeit in sweatshops) in countries like India and Bangladesh where the exploitation of workers is widely reported.

Earlier this month all eyes were focused on H&M and Topshop as reports came flooding in that due to cancelled and unpaid orders, thousands of garment workers in Bangalore had been fired on the spot to cut costs at struggling factories.

From Bangalore to Leicester, the fashion industry is built upon the mass exploitation of those who work within its supply chains.

For many, the realisation that such abuses are taking place so much closer to home has been seemingly harder to swallow. Fast fashion relies on globalisation and like all exploitative industries, it is powered by cheap labour used to generate huge profits with low production costs. From Bangalore to Leicester, the fashion industry is built upon the mass exploitation of those who work within its supply chains.

According to Labour Behind the Label workers, reports reveal that many Leicester factories continued to operate at 100 per cent capacity throughout the COVID-19 lockdown, in part thanks to huge orders from Boohoo.

They note in their report on the abuse of garment workers’ rights that, “garment manufacturing is a major industry in Leicester with over 1000 known sites, excluding homeworking.

“Most factories in Leicester are small workshops, often housed in dilapidated buildings with little investment in building safety and modern ventilation. It is inconceivable that such factories would be able to operate at full capacity whilst ensuring social distancing and adequate COVID-19 protection measures.”

Taking advantage of the pandemic

In the UK, fast fashion completely dominates the clothing market and companies like Boohoo have been hammering their customers with ‘lockdown’ marketing, offering cheap versions of loungewear and activewear to quarantine in.

There is no redemption for fast fashion, no alternative ethical model in which workers rights are prioritised.

Never ones to miss a sales opportunity, coronavirus has provided the fashion industry with new innovative ways to sell people even more products, at the potentially deadly expense of their workers.

According to the Clean Clothes campaign “Boohoo source approximately half their clothes from UK factories based in Leicester, yet independently verifying working conditions in their supplier factories is very difficult due to the secrecy under which Boohoo currently operates.”

But this is not a new problem. In 2018 Sarah O’Connor, an investigative reporter at the Financial Times, reported that the garment factories in Leicester operated like ‘micro-economies’.

The investigation is extraordinary, sources range from factory workers themselves to the owners who all say the same thing, in order to produce such cheap clothing, exploitation is required.

There is no redemption for fast fashion, no alternative ethical model in which workers rights are prioritised.

O’Connor reported that Leicester also seems to be detached from UK employment law and that there is a “perceived culture of impunity”. So why are we only starting to take notice now?

The Leicester sweatshops 'are no new discovery'

The Clean Clothes Campaign said about exploitation in the industry:

"The garment industry, not only the fast fashion industry, is built on poverty wages and sweatshop conditions. These working conditions are no mere flaws of individual factories, but they are driven by an industry practice of pushing for the lowest price and shortest lead times in an eternal race to the bottom.

“The awkward truth is, that as long as this dynamic is not addressed, scandals about working conditions in factories in the UK, Bangladesh or Ethiopia will continue to resurface from time to time.

“As long as brands respond by cutting and running or just addressing conditions in a single factory, the overall level of exploitation will not change. Only if brands change their purchasing practices for the better, can the workers stitching their clothes start to receive decent wages and better conditions.

“The sweatshop conditions in factories in Leicester are no new discovery. It is paramount that this time the issues are addressed properly by moving beyond a factory level approach to holding the brands at the top of the supply chain responsible for the conditions under which their clothes are produced."

Jay Kerr from No Sweat, a campaign based in London that works to offer solidarity between garment workers and raise awareness of conditions in UK sweatshops revealed:

“We welcome the focus on conditions in Leicester’s garment industry, but it is long overdue. No Sweat and the GMB uncovered similar sweatshop conditions in London’s East End as far back as 2002 and although many of these jobs moved overseas to countries like Bangladesh, the BBC’s programme, Dispatches, exposed the sweatshops in Leicester back in 2010.

“While it is important that the factory owners are held to account for any breaches of employment law, brands like Boohoo cannot keep using plausible deniability over the conditions in their supply chains. They can’t say they don’t know what’s happening when it is the job of their purchasing departments to check on the conditions in which their clothes are being made. They must take responsibility.”

It’s a race to the bottom for who can pay their workers the least to produce the clothes the quickest and cheapest.

For garment factory owners who are competing with sweatshops in Myanmar and India, it’s a race to the bottom for who can pay their workers the least to produce the clothes the quickest and cheapest. Buyers from brands can view the market at leisure with no loyalty to suppliers and no commitment to the workers who are the lifeblood of their supply chains.

Much like the consumer’s aim to find the cheapest, most readily available clothing, brands use the same logic to find suppliers across the world. The only way we can begin to tackle exploitation in the fashion industry is to look at dismantling the systems that make it all possible in the first place.

The choice is simple, it’s time for the world to break up with fast fashion.