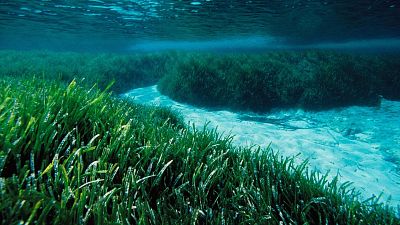 Under the azure waters around the Spanish island of Formentera is one of nature's better-kept secrets.

Famous for its stunning beaches and Luna-like landscapes, the island owes much of its beauty to the Posidonia oceanica grass. Also known as Neptune's grass, this extraordinary plant grows for hundreds of kilometres on the bottom of the Mediterranean.

One of the world's oldest organisms, it has been around for an estimated 100,000 years. Its importance lies in the way it preserves the marine environment and combats climate change. Just one square metre of this seagrass produces as much oxygen as a hectare of the Amazon rainforest.

At the same time, it takes large amounts of carbon dioxide and converts it into plant matter, thereby playing an important role in fighting climate change.

One hectare of seagrass can soak up as much carbon dioxide as 15 hectares of rainforest, according to a Unesco report published in March by Carlos Duarte, a marine biologist from the King Abdullah University in Saudi Arabia.

Enter Manu San Felix, a marine biologist, who has spent nearly three decades campaigning to save the Posidonia.

“I went on my first dive in Formentera in 1993 and the Posidonia captivated me,” San Felix tells Euronews.

“The Posidonia is a super plant, that is to say that it has many purposes. The seagrass meadows produce an ecosystem. It acts as the lungs of the Mediterranean because of the large amount of oxygen that it produces. That helps to clean up the water.

“It also eats up large quantities of carbon dioxide and also is home to large numbers of species which live inside the meadows.”

San Felix said the thickness of the Posidonia meadows help protect the coast from the waves and stops the islands' spectacular beaches from being slowly washed away.

The skeletons of millions of creatures are also preserved within the Posidonia meadows which help to build up the beaches.

Despite this, Neptune's grass faces a very real threat from pollution and the warming of the sea because of climate change.

San Felix says nearly 30 per cent of the Posidonia in the Mediterranean has been destroyed, citing data that appeared in a 2015 study in Nature. The study found that 1.5 per cent of seagrass is destroyed every year and almost 29 per cent of Posidonia has been lost since 1879.

A report published in 2019 by the European Commission says that the Habitats Directive contributed to protecting 1120 threatened Posidonia meadows across the Mediterranean.

Some years ago, only about 400 yachts would come to Formentera or Ibiza but now there are about 4,000 each year so the impact is big.

The Spanish government has also banned owners of boats from laying anchors in certain areas off the islands in the Balearics – despite opposition from yacht owners.

“The problem is one of repetition. Some years ago, only about 400 yachts would come to Formentera or Ibiza but now there are about 4,000 each year so the impact is big,” says San Felix.

“Their anchors can destroy large swathes of the grass.”

To provide a free and easy solution, he developed an app for boat owners. Posidonia Maps alerts them if the seagrass is below their vessels so they do not lay anchor in that spot and destroy the grass below.

The app has charted out the banks of the grass around Formentera, an island that attracts the rich and famous in their yachts every summer. San Felix plans to launch another map for the grass around all the Balearic Islands this summer and will follow this with a more ambitious map for the entire Mediterranean later.

What is Blue carbon?

The Unesco report published in March found that 33 billion tonnes of carbon dioxide – about a third of the world's emissions in 2019 – are locked away in the planet's blue carbon sinks.

Repeated forest fires are one symbol of climate change that can damage the ability of trees to absorb carbon dioxide.

In a study published in February in Nature Ecology and Evolution, researchers at Stanford University in the United States found that slow-growing trees were better able to survive blazes, but could not soak up as much carbon.

These blue carbon ecosystems are denser than those on land and have another advantage over those on land because they do not burn.

Back in Formentera, San Felix hopes that people will become aware of the importance of Posidonia.

“I want people to be aware of the amount of Posidonia which has been destroyed and how we can stop that happening easily. This seagrass is vital to the marine environment,” he says.