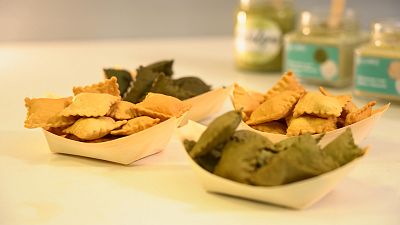 The aquatic ecosystem could give our food chain a helping hand. The demand for food is rising and more sustainable production systems are needed. That's why Europe is opening up to the algae sector.

Humans have been eating macroalgae for a long time, but attention is now turning to their smaller cousins, microalgae, for their nutritional potential.

In Pataias, Portugal, the company Allmicroalgae is developing algae-based applications for foods like cookies, bread, snacks and spreads.

There are more than 72 500 species of algae, living in both fresh water and seawater. The larger are called macroalgae and they make up 20% of all species. The remaining 80% is made up of microalgae.

These single-celled microalgae begin their journey to become a source of food in a laboratory, in flasks that contain a liquid culture. Every microalga has varying nutritional value. Some of the nutrients they contain are essential amino acids, essential fatty acids, including omega-3, omega-6, omega-7, and vitamins, like A, D and E. Two of the most popular for human consumption are Chlorella and Spirulina.

Joana Silva is the R&D technical manager at Allmicroalgae. She describes how they work with algae in the company. They start by doing the analytics that allow them to evaluate whether the growth of the microalgae in the photobioreactors is going well or not. "We need to know what happens inside the cell to determine the total protein value and the magnesium consumed within the nutrient medium", she explains. They also check for iron and "several micro and macronutrients that are essential to the culture and that allow the algae to optimise its nutrient consumption".

Algal cultivation requires exact procedures in order to achieve abundant biomass yields. Traditional yeast, like the one used to make beer, activates the fermentation process, then the culture is injected into large photobioreactors where it grows until it reaches the right quality standard. After that, it is harvested and processed into fine powder.

The algae are inoculated in reactors where with every new inoculation the culture volume is increased. That is done until they have enough cells to make it worth moving on to the processing stage. The processing stage is meant to concentrate the cells to then make a concentrated paste for the aquaculture market. This concentrate can also be made into a powder that can be used as an ingredient or a food supplement.

The food industry's interest in microalgae is rising quickly due to new consumer habits, sustainability of production, but also for health reasons. The managing director of Allmicroalgae says the plant-based protein is good, not just for the vegetarian or vegan diet, but it could also be used for "people who are sick and who have difficulties eating high protein products".

Under the European Union's Farm to Fork strategy, the Commission is looking to unlock the full potential of the algae industry by the middle of 2022.

How sustainable farms in Italy are improving animal welfare