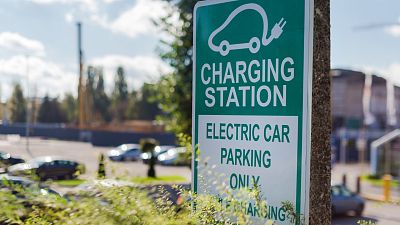 The future of motoring is set to be electric in the UK.

In November 2020, British Prime Minister Boris Johnson outlined a ten-point climate plan dubbed the ‘Green Industrial Revolution’. It is worth £12 billion (€13.4 billion) and aims to create 250,000 jobs in the UK over the next ten years.

The main points included a firm commitment to transition to electric vehicles by 2030, alongside investment into zero-emissions public transport and £1 billion towards making buildings more energy-efficient.

“What we’re seeing in the UK is a date [...] but without a roadmap...excuse the pun... of how to get there,” says David Bailey, professor in Industrial Strategy at the University of Birmingham

Cars produce harmful carbon emissions, with transport being the biggest source of air and noise pollution in the UK. But for British carmakers, the 2030 deadline may be tough to meet.

“This really is the biggest change in the auto industry for the last hundred years. At the moment in the UK for example, one in 10 cars sold is a plug-in. We’ve got to go from one in 10 to 10 out of 10,” adds Bailey.

The good news is the UK is the biggest electric car producer in Europe. The only area it is lagging behind in is battery production.

“Battery manufacturing and the actual manufacturing of the car will be very close together. Batteries are pretty heavy to transport around the world. New plants are coming up in eastern Europe, in Scandinavia, whereas the UK has only got that one plant near Sunderland,” explains Stephen Gifford, Chief Economist at the Faraday Institution.

Brexit adds yet another complication, as UK built cars will need to be made from local parts by 2026. The industry must adapt fast to be ready in time

“We are behind in the race but there’s still plenty of time to catch up,” Gifford concludes.