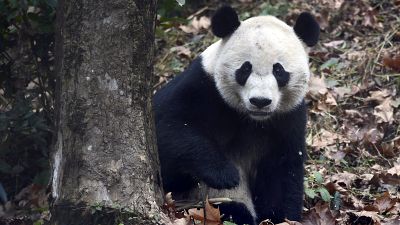 China announced on Friday that it had removed giant pandas from its endangered list.

According to an article posted on the Ministry of Ecology and Environment's website, the population of giant pandas living in the wild in China had risen to 1,864 by 2013, up from 1,596 in 2003.

The head of the ministry's Department of Nature and Ecology Conservation told reporters that the rise "reflects their improved living conditions and China's efforts in keeping their habitats integrated."

The figures are based on a census of China's pandas carried out every decade since the 1970s in the three provinces that have the largest giant panda populations: Sichuan, Shaanxi, and Gansu.

China's decision to remove the giant pandas from its endangered list comes five years after the International Union for Conservation of Nature downgraded the giant panda's status from endangered to vulnerable on its Red List of Threatened Species.

Giant pandas have a naturally slow breeding rate with females ovulating only once a year and then raising their cubs for up to three years. Although two cubs may be born at the same time, usually only one survives and is particularly vulnerable weighing no more than five ounces (about 145 grams).

The Chinese ministry also reported notable improvements for several other species with the numbers of Siberian tigers, Asian elephants and crested ibises living in the wild also growing.

Why 2020 was a promising year for wildlife around the globe