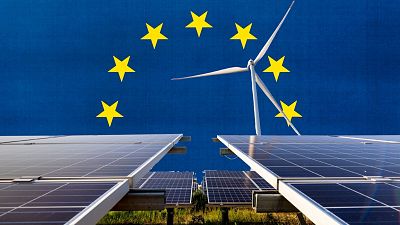 Fossil fuel-powered energy fell to 37 per cent whereas renewable sources rose to 38 per cent in 2020, according to a report published today. This means clean energy has overtaken sources like gas and coal in the EU.

“It is significant that Europe has reached this landmark moment at the start of a decade of global climate action,” explains Dave Jones, senior electricity analyst at UK thinktank Ember and lead author of the report.

“Europe is relying on wind and solar to ensure not only coal is phased out by 2030, but also to phase out gas generation, replace closing nuclear power plants, and to meet rising electricity demand from electric cars, heat pumps and electrolysers.”

While this is a promising start, the report says that the increase in renewables is still too slow to reach new 2030 climate targets. The EU has pledged to reduce emissions by more than half in the next decade.

The increase in renewables is still too slow to reach new 2030 climate targets.

“The European Green Deal – our response to the climate crisis – requires some 100 TWh of annual additions of renewables, a doubling of the deployment speed seen in 2020,” says Patrick Graichen, director of German energy thinktank Agora Energiewend.

Boosted by wind and solar

The rise of renewables has been significantly boosted by the increased use of wind and solar energy. The two together generated a fifth of Europe’s electricity last year.

Coal dropped by a fifth in 2020 and has halved since 2015. Gas, which the chief of the European Investment Bank recently declared "over", only fell by four per cent.

The news comes after solar was named the “cheapest electricity in history” by the International Energy Agency (IEA) in October. The technology is now less expensive than coal and gas in most major countries.

The intergovernmental organisation warned, however, that it was too early to say that fossil fuels had peaked.

“The era of global oil demand growth will come to an end in the next decade,” states Dr Fatih Birol, IEA executive director. “But without a large shift in government policies, there is no sign of a rapid decline.”

He adds that a global economic recovery after the pandemic could push the demand for fossil fuels back to where it was before COVID-19, causing emissions to rise once again.

“Governments have the capacity and the responsibility to take decisive actions to accelerate clean energy transitions and put the world on a path to reaching our climate goals, including net-zero emissions.”