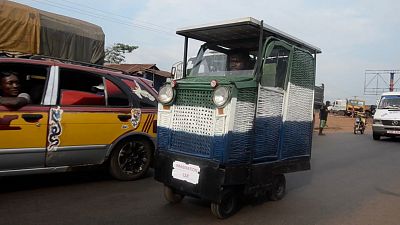 A 24-year-old man has made his dream into a reality in Freetown, Sierra Leone.

Emmanuel Alieu Mansaray, a student at university, came up with the idea of building a solar-powered car made from trash and scraps he picked up along the way. The project took him three years of hard work, but the car is now up and running.

Mansaray regularly drives it around the town and can reach speeds of 15km per hour. The ‘Imagination car’ is designed using the country’s signature colours of green, white and blue and locals describe it as “amazing”.

Pollution is a growing problem in Sierra Leone. Now, more than ever, there is a need for renewable transport to ensure cleaner air for its inhabitants. It has been rated as the 17th most vulnerable country in the world, when it comes to air pollution.

And it’s not just transport that’s the problem. Many households use charcoal or wood as a source of fuel for cooking, meaning the amount of carbon dioxide produced in cities is on the rise. Residents of Freetown are exposed to indoor and outdoor pollution, which can cause numerous different health problems, according to the World Health Organisation (WHO).

Mansaray’s aim is to address goal 7 of the UN Sustainable Development Goals, so that affordable, green energy can be accessible to all.