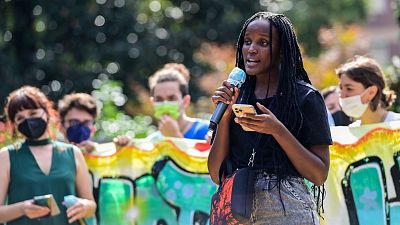 “At the time, there was a lot of agony, a lot of pain. But now I’m on a journey to ensure that this doesn’t happen to anyone else,” she tells me, nine months on. “I am happy to use my voice and use my platform to always demand for the inclusion of marginalised voices and Indigenous voices.”

Vanessa speaks to me from her home country Uganda, where she lives in the capital city Kampala. We talk about the differences between Europe and Uganda, and how climate change is impacting countries in different ways.

The Global South, we agree, doesn’t receive the coverage it deserves in the mainstream media.

Africa is the least polluting or carbon emitting continent, but one of the most severely affected by the climate crisis. I ask Vanessa what effects she has seen in her own community.

“The Global South is not on the front page, but it is on the front line,” she says. “A lot needs to change in the media. Because if we do not tell the stories of those affected the most, how will we get justice and solutions for them?

“People in my country heavily depend on agriculture for survival, those in rural communities. There is a lack of rain, which means starvation and death for many people. But then, when the rains come, they bring about floods because of changing weather patterns. So rain only causes destruction of homes and farms."

Africa is the least polluting or carbon emitting continent, but one of the most severely affected by the climate crisis.

"When water levels rose in Lake Victoria, many people were displaced and left homeless, their businesses left destroyed. Houses and even toilets were submerged, which then contaminated the water and meant it was difficult to gain access to clean water."

The largest rainforest in Africa

Alongside changing weather patterns, another thing Vanessa worries about is the Congo rainforest. It’s the largest rainforest in Africa and the second largest tropical rainforest in the world. According to the WWF, the vast Congo basin spans 500 million acres, bigger than the state of Alaska, US, and is a mosaic of rivers, forests, savannas, swamps and flooded forests, teeming with life.

“The Congo rainforest is the lungs of Africa,” Vanessa tells me. “Many people rely on it for their livelihoods, but the world is not paying attention to the destruction of this forest.”

We are all living in this comfort that climate change isn’t here yet. But it is here, people are being impacted now.

It was only when Vanessa started learning, listening and reading about issues such as the Congo rainforest and rising water levels, that she decided to take action.

“That was when I decided to become a voice. Honestly, I was surprised to learn that climate change was a problem, because at school it was taught as though it was, either, in the past, or in the far future that we don't have to worry about. We are all living in this comfort that climate change isn’t here yet. But it is here, people are being impacted now.”

Earlier this year, Vanessa decided to undergo a hunger strike.

It’s a difficult but powerful form of striking, I say, what made you choose to give up food? “It is linked to the crisis we face with agriculture, here in Africa. I decided that I wouldn't eat anything on Fridays, as a form of protest, because if I was denying myself food, maybe it would catch the attention of the public and the leaders - to see how serious this issue is.”

“We cannot eat coal, we cannot drink oil. No one serves fossil fuels at the dining table.”

When she first started protesting, Vanessa would go into local schools to teach children about climate change. She says it was hard, as she grew up a “really shy person”, but she soon realised that this was an issue worth speaking up for.

That was where social media came in. Platforms like Twitter became powerful tools to help Vanessa spread her message across Africa and beyond, over to Europe and the US. She says Greta Thunberg was a huge source of inspiration.

“When I first started striking, I was just doing it for my local community in Uganda, I never expected to get help from activists around the world. But it really amplified my message and helped me a lot.”

A crucial moment to demand change

We finish our conversation by bringing it back to the media and coverage of the coronavirus pandemic. I ask Vanessa what she thinks the world will look like in future and whether we can learn anything from this global health crisis?

“There is so much to learn,” she says decisively. “There is daily, hourly reporting on the pandemic - climate change coverage should be the same.

“This pandemic knew no class, it knew no authority, it knew no money, meaning all of us can be victims. When leaders learnt about the science behind the virus, they listened and put in place lockdowns and restrictions. But when it comes to climate change, they do not take action.

“Well I am sorry to disappoint, but anyone can be a victim of the climate crisis. The intensity may be different, but it's the same thing.”

For Vanessa, the pandemic is a crucial time to take stock of what is important and put pressure on leaders to listen. Now is the time to change the way we live, to become more sustainable, in order to secure our futures.

“People always say that it is hard for human beings to adapt to new ways of living, but the pandemic has shown that we can.”

How is Japan releasing Fukushima nuclear wastewater into the sea?

Stargazers are the unexpected winners of the cost of living crisis