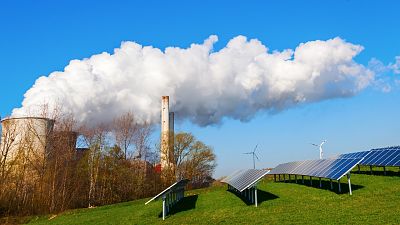 Werner Hoyer has said that financial institutions need to take a stand against investing in unsustainable projects.   -   Copyright  Getty via Canva
By Rosie Frost  •  Updated: 22/01/2021

Europe needs a serious departure from past use of fossil fuels in order to meet climate targets, says President of the European Investment Bank, Dr Werner Hoyer.

“To put it mildly, gas is over,” Hoyer said at a press conference on Wednesday to present the bank’s annual results.

The use of natural gas to transition away from other fossil fuels has been controversial in Europe. The European Commission has said in the past that it is necessary to help countries reliant on coal to reduce emissions.

But Hoyer said that EU member states that have been “putting all their eggs into the basket” of gas now need support to transition to alternatives.

“Instead of financing assets we will have to write off tomorrow, we must invest in energy efficiency, renewable energy, sustainable mobility and green innovation,” Hoyer added in a statement. He also called on other financial institutions to take a similar stand against environmentally unsustainable projects.

The bank chief said that what was needed was “massive investment in a green recovery”.

The EIB is looking to “transform into the EU’s climate bank”. Its Climate Bank Roadmap for achieving this, published in November last year, lays out plans to unlock €1 trillion for green funding and use 50 per cent of the bank’s activity to support climate action by 2030.

It has also stated that it will put an end to financing for fossil fuel energy projects by January 2021.

Critics, however, have called into question the EIB’s lack of guidance on trustworthy clients that would help to reach these climate goals. CEE Bankwatch, one of the biggest networks of environmental NGOs in central and eastern Europe, says the bank is lagging behind on transparency.

Bankwatch claims EIB has failed to do its due diligence on environmental and social sustainability for past projects.

“For instance, Bankwatch revealed how the EIB had enabled, through the financial intermediaries, massive and poorly planned hydropower development in Western Balkans, and showed that the Bank does not screen its projects for their impact on human rights, including in countries ranked very low on Freedom House’s Freedom in the World index,” says Aleksandra Antonowicz-Cyglicka, a researcher for the network.

“In the transport sector, for instance, the EIB could still support motorways and expressways at a time when private vehicles with internal-combustion engines urgently need to be restricted, not encouraged,” Roggenbuck explains.

“This policy loophole needs to be closed to ensure the EIB is no longer bankrolling the climate crisis, even if indirectly.”