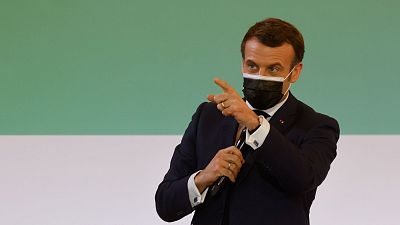 French President Emmanuel Macron gestures as he speaks during the One Planet Summit, part of World Nature Day, at the Reception Room of the Elysee Palace, in Paris.   -   Copyright  LUDOVIC MARIN/AFP or licensors
By Rosie Frost  •  Updated: 11/01/2021

World leaders will attempt to revive international environmental talks on Monday during a global summit on biodiversity.

The One Planet Summit’s organisers hope to restart international efforts to protect nature ahead of UN biodiversity talks this year which had to be postponed due to the Covid-19 pandemic. France is hosting the event in Paris alongside the United Nations and the World Bank.

“What we know is that we can move the dial if we decide to do so,” French President Emmanuel Macron said in his opening speech.

“Our future and that of our planet depend on what we do here and now. ”

Biodiversity targets for 2020 were not met

Despite being a year that highlighted the importance of protecting the planet more than ever, 2020 saw international cooperation stall as climate talks were cancelled. So far efforts to preserve and protect the natural world have failed dramatically.

“The world has not met any of the global biodiversity targets set for 2020 and biodiversity is facing a financial gap of $711 billion (€585bn) per year until 2070,” said UN Secretary General, Antonio Guterres.

“2021 must be the year to reconcile humanity with nature. Until now we have been destroying our planet, we have been abusing it as if we have a spare one.”

Two-thirds of the world’s wildlife has been lost since 1970 and in 2019 the UN’s science advisory panel for biodiversity warned that one million species face extinction due to habitat loss and exploitation.

The One Planet Summit is hoping to reignite discussions and lay the groundwork before 200 countries attempt to work out how to protect our rapidly disappearing biodiversity in October this year.

“The COVID-19 pandemic has been a dramatic reminder of the importance of nature for our daily lives and economies,” the summit’s organisers said in a statement.

“Biodiversity represents the natural capital of the world, yet exploitation, pollution and climate change are bringing irreversible damage to ecosystems.”

The summit brings together heads of state and government as well as leaders of international NGOs, financial institutions and business leaders. Organisers say that all participants are “ready to make commitments for concrete action to preserve and restore biodiversity”.

There are four key themes for One Planet summit:

One of the key announcements on Monday was the creation of the Great Green Wall Accelerator. It aims to inject “fresh momentum” into the project to prevent increasing desertification in the Sahel region of Africa.

A coalition of more than 50 countries across six continents also called for 30 per cent of the planet’s land and oceans to be protected by 2030. Costa Rica, the UK and France are co-chairing the group pushing a global deal to halt the accelerating loss of species and protect vital ecosystems that are the source of our survival and economic security.

The High Ambition Coalition (HAC) for Nature and People said that protecting at least 30 per cent of the planet by the end of the decade was vital to prevent the mass extinction of plants and animals.