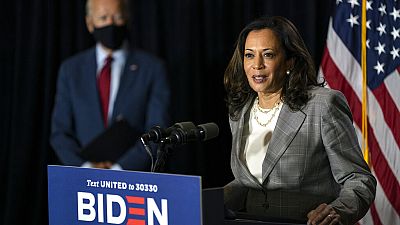 Today Kamala Harris is making history as not only the highest-ranking female elected official in US history, but also the first African American and first Asian American to ever be vice president.

After she was picked by (the incoming) President Joe Biden as his running mate last year, supporters were quick to highlight the former California Attorney General's accomplished political and legal background. But what about her record on environmental issues?

Green voters were more important than ever in last year's election. After the global climate protests, school strikes, and growing emphasis on environmental policy - it wasn't an issue either side could afford to ignore.

At the Iowa Democratic caucus in early 2020, over 20 per cent of voters cited the climate as the most important issue for them when deciding who to support. Only 2 per cent of voters ranked the environment as their top priority in 2016.

“2020 is undoubtedly the first presidential election where climate will be a top priority for a huge bloc of voters,” Nathaniel Stinnett, founder of the Environmental Voter Project, explained to Quartz.

Now that the Biden-Harris administration is about to officially begin, we look at where Kamala Harris's strengths and weaknesses lie when it comes to green issues.

This is where Kamala Harris comes into her own. While she was district attorney of San Francisco, 15 years ago, Harris created an environmental justice unit, which specifically existed to deal with cases of environmental crime.

Harris identified that "crimes against the environment are crimes against communities, people who are often poor and disenfranchised," as she said to the San Francisco Chronicle in 2005.

The nexus between socio-economic disadvantage and environmental damage is something Harris has sought to address consistently - long before terms like ‘intersectional environmentalism’ even existed.

More recently, Harris has sued major oil companies after they violated environmental legislation, and following the devastating Refugio oil spill in 2015, the company responsible (Plains All American Pipeline) was indicted on 46 criminal charges.

The following year, when Volkswagen was found to have cheated on its diesel emissions, Harris secured a €73m settlement from the car manufacturer for the state of California.

But some have criticised this emphasis on environmental justice, as while Harris was DA her focus was primarily on crime - rather than addressing ecological concerns without a criminal angle. “I don’t think climate wakes her up at 3 a.m.,” founder of the environmental group Climate Hawks Votes RL Miller said to Bloomberg Green.

Interestingly, as part of the Biden Climate Plan, the new president has pledged to introduce an Environmental and Climate Justice division within the Department of Justice. The new division is specifically aimed at prosecuting anti-pollution cases.

Although Kamala Harris is seen as a more moderate voice in the Democrats, particularly when compared with figures like Alexandria Ocasio-Cortez, it didn’t stop her from teaming up with AOC to devise the Climate Equity Act.

The bill centres the environmental health of low-income communities when green legislation or regulation is being introduced. It means that any potential new laws or plans are rated on their effect on these communities, which are disproportionately on the frontlines of the climate emergency.

“COVID-19 has laid bare the realities of systemic racial, health, economic, and environmental injustices that persist in our country,” explained Senator Harris in June last year.

“The environment we live in cannot be disentangled from the rest of our lives, and it is more important than ever that we work toward a more just and equitable future. That is why, as we combat the climate crisis and build a clean economy; we must put justice and equity first.”

During her last year campaign to secure the Democratic nomination for president, Harris announced a $10 trillion (€8.4 trillion) plan to combat greenhouse gas emissions and reach net-zero by 2045 - five years earlier than the target of the progressive Green New Deal.

The suggested plan involved investing in the USA’s transportation, water, and energy infrastructures, with an aim of achieving completely carbon neutral electricity by 2030. She was praised during her campaign for having the most extensive environmental plan, embracing a genuine sense of emergency and urgency in this area.

When it comes to fossil fuels, the new vice president has a slightly less clear record.

During her presidential campaign, she did sign the no-fossil-fuel-money pledge agreeing not to take any donations from fossil fuel companies or lobby groups. She signed the pledge alongside most of the other hopeful Democrat nominees - but Harris was one of the last candidates to make the commitment. Before agreeing not to take donations from these groups, Harris had previously received industry donations.

But, as shown after the Refugio oil spill, Harris hasn’t been afraid of standing up to big oil companies - and that includes fracking.

When asked at a CNN town hall if she would ban fracking, Harris replied, “there is no question. I am in favour of banning fracking.”

This hardline approach, while popular with environmental activists and communities affected by the practice, isn't favoured by communities financially dependent on fossil fuels. However the new Biden plan promises to introduce 10 million new, clean energy jobs, which means a transition away from fracking could be easier than expected.

According to the League of Conservation Voters (LCV), Harris has a lifetime voting record of 91 per cent pro-environmentalism. This score makes her “a true environmental champion,” according to LCV vice president of government affairs, Tiernan Sittenfeld.

Presidential nominee Joe Biden, on the other hand, has a lifetime score of 83 per cent.

“Senator Harris has been a long-time champion for climate action and environmental justice,” adds Sittenfeld. “We know she will continue the fight for a more just solution to the climate crisis."

For animal protection, Harris scores highly once again. According to the Humane Society Legislative Fund’s scorecard, which considers the voting record of every member of the Senate, the California Senator has achieved full marks every year.

Admittedly, a lot of her work in this area has again focused on justice and criminality, rather than non-legislative animal welfare work.