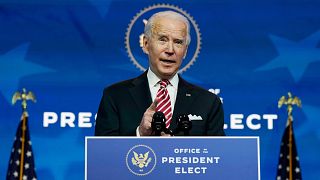 Today Joe Biden becomes the 46th President of the United States, and with his inauguration comes a significant number of environmental promises.

The Biden-Harris campaign was run on a green platform, with the Biden Plan at the heart of their strategy. In July, the new president announced a $2 trillion (€1.65tn) proposal for reducing America’s dependence on fossil fuels, while creating new eco jobs to help strengthen the economy after the Covid-19 pandemic.

After Democrats Raphael Warnock and Jon Ossoff won their respective US Senate runoff races in the state of Georgia, Biden is starting his tenure with the full support of both the Senate and the House of Representatives. This means passing legislation will be easier than it was for the majority of Barack Obama’s presidency.

With Joe Biden and Kamala Harris in the White House, what does their administration really mean for the planet?

The Paris Agreement is back on

In June 2017, former president Donald Trump announced that the US would be withdrawing from the Paris Accord. In a 30-minute speech delivered from the famous White House Rose Garden - a venue usually reserved for significant public statements - Trump attacked the Paris Agreement, saying compliance with the terms of the accord would disadvantage the US.

But the US didn’t actually leave the pact until November last year, making it the first country to formally leave.

It took more than three years to exit the agreement, thanks to a clause introduced by the Obama administration when the pact was signed in 2015. This caveat ensured that any subsequent US government would have to wait three years before giving notice that they would leave the accord, and then wait another 12 months to officially withdraw.

As a result, Biden is able to rejoin the Paris Agreement less than three months after the US left, meaning there hasn’t been enough time for Trump to pass any major legislation which could hamper progress towards the 1.5°C goal.

Throughout his presidential campaign, Biden pledged to rejoin the Paris Accord within his first few days of office, and he revealed last week that rejoining the agreement was on the agenda for day one.

This is majorly important for countries around the world, as it was feared back in 2017 that an American departure would lead to similar exits. So far no other country has left, and climate activists and scientists hope that the US rejoining will strengthen the situation.

In summary: The US is rejoining the Paris Agreement today.

Introducing the ‘most ambitious’ climate plan in history

As part of his campaign, Biden also ran on a platform of clean energy, investment in green infrastructure, and a commitment to end American reliance on fossil fuels.

“These are the most critical investments we can make for the long-term health and vitality of both the American economy and the physical health and safety of the American people,” Biden said in the run up to the election.

The Covid-19 pandemic is still devastating the US economy, with the World Economic Forum predicting a potential rise of 20 per cent in the unemployment rate - a level the country hasn’t seen since the Great Depression in the 1930s.

As a result, Biden plans to focus on job creation - which is where his climate plan comes into effect. In addition to transitioning large swathes of the workforce from fossil fuel-based industry, Biden hopes to create 10 million new jobs in the clean energy sector.

His climate plan also sets out a goal of emissions-free electricity by 2035 and total carbon neutrality by 2050. Though the targets have been praised, the timeframe has been criticised by climate activists - many of whom prefer the alternative Green New Deal.

The Green New Deal, put forward by progressive Democrats like Rep. Alexandria Ocasio-Cortez, is largely similar to Biden’s climate plan, but with more ambitious timelines. The GND calls for a full transition to zero-emission energy sources by 2030, for example, as well as also focusing on social issues such as universal healthcare and affordable housing.

A new focus on environmental justice

For example, 40 per cent of the budget is designated to helping historically disadvantaged communities, including supporting Indigenous peoples who are already disproportionately impacted by the climate crisis and environmental issues.

This strongly ties in with the work already done by the new vice president, Kamala Harris, who established one of the country’s first environmental justice units while district attorney of San Francisco.

The Biden-Harris administration has announced plans to introduce a new Environmental and Climate Justice division within the Department of Justice, specifically aimed at prosecuting anti-pollution cases.

In summary: there will be a major push to tackle environmental issues through legal avenues.

An end to the Keystone XL Pipeline

Despite efforts from the Obama administration to block its development, the Keystone XL Pipeline was granted permission early on in Trump’s term.

The controversial project is the proposed fourth phase of the existing Keystone Pipeline, a network of oil pipelines linking a basin in Alberta, Canada with refineries in both Illinois and Texas, US.

During his first week in office, Donald Trump announced plans to revive the XL portion of the network. This phase would have been an additional 526km of pipelines, crossing through Nebraska’s Sandhills, a National Natural Landmark.

In summary: one of the most controversial pipeline projects in recent years is off the table.