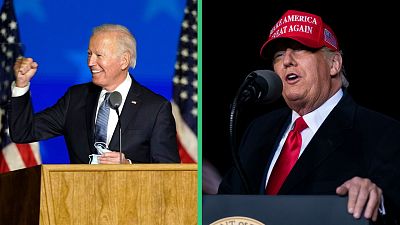 Climate change emerged as a major factor for people casting their vote in the United States on 4th November.

Neither candidate has a spotless reputation when it comes to the environment. But when you look at their visions for the future of America, only one has put forward a clear plan to take action on the global crisis.

President Donald Trump claims that he wants the US to have the “cleanest water on the planet”, in fact, the “cleanest air everywhere”. He calls climate change a “serious subject”, one that is very important to him.

Yet, the President has also stated he doesn’t believe climate change is manmade. He has been known to criticise global environmental goals as being unfair on the US economy and at the World Economic Forum’s Annual Meeting in January this year, his exact words were that we should not listen to “perennial prophets of doom”.

Historically the US has put more greenhouse gases into the environment than any other country. Currently ranked as the second largest contributor to the climate crisis after China, America’s carbon footprint is a point of contention worldwide.

Whoever is in the White House over the next 4 years will have a big impact on the environment and the rate at which we continue to fight climate change as a globe.

From endangered species to crucial NASA funding, here are six ways the US election and the climate are inextricably linked:

In 2017 Donald Trump announced that the US would cease all participation in the Paris Climate Agreement and start negotiations to re-enter with terms that “are fair to the United States”. The Trump administration believes the agreement disadvantages the US, leaving taxpayers and workers to absorb the cost of climate action.

Biden has said that he would seek to rejoin early on in his presidency. But it could take up to 30 days to do so and any environmental policy that is introduced as a result would first have to be passed through the House and the Senate.

The President-elect’s climate plan says that he “will not only recommit the United States to the Paris Agreement on climate change,” he will go “much further than that”. Biden plans to “lead an effort to get every major country to ramp up the ambition of their domestic climate targets”.

Despite Biden's win, the US still left the Paris Agreement the day after the election, but how and if they choose to rejoin remains to be seen.

It also uses this information, including data from satellites, to study climate change and is key to understanding what human actions can both harm and help our planet.

Over the past four years, Trump’s budgets have sought to cut funding to NASA’s earth science’s programmes including cancelling projects for the environment. Instead, science spending has been focused on areas including artificial intelligence, 5G communications and biotechnology - what the Trump administration calls the “industries of the future”.

Whereas Democrats have been fighting to get the budget restored. The party’s platform calls for “strengthening NASA and the National Oceanic and Atmospheric Administration’s Earth observation missions to better understand how climate change is impacting our home planet”.

Biden has said that he will “transition away from the oil industry”. His climate plan involves boosting investment in order to reach net zero emissions - with a goal of 100 per cent clean energy by 2050. He claims that this transition will create jobs for Americans in a critical time for the US economy.

During his campaign, Biden also refused funding from fossil fuel corporations and executives, a move that has been seen by some as a clear signal of his serious take on the issue. However, he says he won’t ban fracking, a key election issue and contentious decision for many environmentalists.

During the Trump administration, regulations on the fossil fuel industry have been rolled back dramatically. It is now easier for public land to be leased for oil and gas drilling, oil pipeline projects sidelined by previous governments have been resurrected. In fact, during Trump’s tenure, the US has become the biggest producer of oil.

Much like his position on the Paris Agreement, Trump believes that regulations on the fossil fuel industry will pass the cost on to the country’s citizens.

The Endangered Species Act (ESA) is an environmental law from the 1970s that has been credited with bringing species such as grizzly bears and grey whales back from the brink of extinction.

It was revised by the Trump administration last year, weakening protections for threatened species. The changes to the way the act is applied allow federal agencies to look at economic impact when deciding whether a species should be protected.

At the time, the US government’s justification was that it wanted to ease the burden of regulation and improve transparency around whether a species deserves to be protected. Conservation organisations have challenged this, with some taking legal action to protect species in the US and around the world.

Biden opposes Trump’s revisions to the ESA, promising better funding. His opinion is that at a time when “climate change is pushing our planet to the brink”, protections should be strengthened not weakened.

During the presidential debate on the 29th September 2020, both Trump and Biden stated they were in support of more electric vehicles.

Biden’s climate plan involves putting 500,000 charging stations along major roads in the US to encourage more people to make the switch from petrol and diesel. Last year there were around 68,000 charging points in the country with 22,620 of these found in California.

“I’m OK with electric cars, too. I’m all for electric cars. I’ve given big incentives for electric cars,” Trump has said on the issue. He has also previously praised Tesla CEO, Elon Musk as one of the country’s “great geniuses” and backed plans to build a “very big plant” in the United States.

But the President added, “what they’ve done in California is just crazy.”

California has strict emissions standards for vehicles and has plans to ban the sale of new fossil fuel powered cars and trucks by 2035. In 2019, the Whitehouse made the controversial proposal to end tax credits for people who chose to buy battery-powered electric vehicles.

Global solidarity on climate change is incredibly important and the US has an enormous part to play. The country has a lot of influence on private financial institutions, which make choices about whether to invest in environmentally damaging industries.

A new administration which signals that climate is at the top of their agenda could force other countries like Brazil and Australia to take positive action on climate change too. Currently, the EU has stepped in to fill the leadership gap left by the US in encouraging other countries to implement stronger environmental policies.

What the President of the United States does over the coming four years will have an impact on whether the world is able to prevent an ecological catastrophe. If the US emerges from this election with a strong climate plan in place, a high green bar would be set on the international stage.

'No time to waste': Biden introduces his climate team