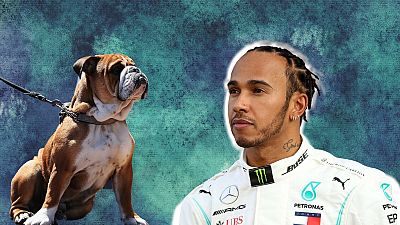 Earlier this month Lewis Hamilton revealed that his dog was now “fully vegan”.

The Formula 1 champion has been plant-based himself for the last three years or so, but his British Bulldog Roscoe has only recently made the complete switch. Hamilton shared the news on his dog’s Instagram account, explaining that his beloved pet is “super happy with the result.”

Roscoe had previously suffered health issues - typical for flat-faced breeds like pugs and bulldogs - but Hamilton says these issues have cleared up since making the dietary switch.

“Since he has gone vegan, his coat is much softer, his swollen paws have healed up,” he explained, “he is no longer limping with the pain of arthritis and his breathing has opened up.”

Hamilton’s other bulldog Coco died in June, aged six, after battling a litany of health problems. Despite trying to revive her, Hamilton was unable to save Coco, but was spurred by this tragedy to reconsider what he was feeding to his pets. “I’m looking into dog food and supplements,” Hamilton said in an Instagram post, “as I think this industry can be better and our pets deserve the best we can give them.”

The idea of vegan dog food may seem utterly absurd at first glance, but it turns out that plant-based pet food is a growing movement, with a surprising level of support.

As doctors warn that we need to move away from animal products to protect both human health and the environment - what about the diets of our pets?

What do experts have to say?

As the owner of two large sheepdogs, the more I researched this topic the more intrigued I became. After spending months painstakingly searching for the healthiest, most-balanced meals for both my dogs, I had settled on a raw-food diet. My two eat a blend of raw meat and vegetables every day and are exceptionally fit and healthy. So a vegan diet seemed to be the exact opposite of what I had settled on as the ‘best’ choice.

But the experts don’t necessarily agree.

"It is possible to feed dogs a vegan diet so long as it is adequately balanced,” explains Michaela Craggs, a veterinarian at Joii Pet Care. “Anecdotally, I have seen some dogs do well on vegan diets and I have seen some improvement with dogs with skin allergy. This is likely due to the change of protein. This is only anecdotally though and there isn't the evidence to back this up at present.”

Michaela does caution that pet owners looking to make the switch should first talk to a vet, to make sure a drastic diet change wouldn’t cause any harm. “The main thing to be sure about when feeding a vegan food to a dog is that it's a complete food,” she adds.

Leading animal behaviourist James Carroll supports this view. “A good vegan dog food seems to be on par with meat-based dog food,” explains James, “at least according to a two-year study which compared the two. Dogs at the end of the research had nutrient surpluses which were similar to each other, but varying nutrient deficiencies - with more deficiencies in the meat-based diet.

“This really just goes to prove that no standard diet can meet all the needs of every individual dog.”

James also advises pet owners to speak with nutritional experts if they want to properly understand their dogs’ nutritional needs, using blood tests to determine if there are any deficiencies which need addressing.

But there’s also the matter of palatability. From personal experiences only, I know one of my pooches would sooner go to bed hungry than go near a vegetable - so would a dog ever really choose these meals?

“On a taste test it is unlikely dogs would choose a plant-based diet,” says James, “although some might! This only matters in relation to how food-motivated a dog is: more food-fussy dogs are less likely to eat enough plant-based food to maintain a good condition.”

What do vegan dogs eat then?

The plant-based pet food business is small, but rapidly expanding, with more new brands popping up each year. Benevo is a UK-based ethical pet food company that has been in operation since 2005, making it one of the oldest vegan dog food providers in Europe.

“Back in 2004, it became apparent to us the last meat in most veggie households was the meat their pets were eating,” explains Benevo’s website. “Many of those pets were rescue animals and so having rescued one animal, people found themselves with an ethical dilemma as they spooned out a less fortunate animal from a tin. For some, having to buy meat to feed a pet meant they had chosen not to have a pet at all.”

The company researched how to replace essential nutrients derived from meat with bio-alternatives from non-animal sources. The main adult dog food Benevo supply is made with soya, corn, white rice, sunflower oil, peas, beetroot, and tomato. The result is a product with 27 per cent protein content - an impressive figure, given there is no meat featured at all.

There’s a grain-free option too, without soya, corn, or rice - instead made up of lentils, potato, and chickpeas. This only has 6 per cent protein content, so it’s a notable drop in the nutritional quality, but better-suited to dogs on grain-free diets.

Some pet owners may be tempted to prepare vegan meals for their dogs themselves, but this isn’t something vets recommend.

“I do not advise home prepared vegan diets as they are extremely difficult to balance,” warns Michaela. “As a vet I would not attempt to balance a diet myself. However, if an owner is very keen on this then I would encourage them to contact a certified veterinary nutritionist to ensure they are using an appropriate recipe. This is because it's possible for animals to have a nutrient deficiency if fed inadequately formulated commercial or home made diets.

“They can develop skin conditions associated with inadequate levels of zinc. Diets that are high in fibre can interfere with the absorption of essential fatty acids which can also lead to skin and coat abnormalities.”

The owners switching their dogs to vegan diets tend to be vegetarian or vegan themselves. “They’re doing it for ethical, usually for farm-animal welfare reasons,” says James.

A lot of commercial pet foods use meat sourced from abattoirs’ ‘4D bins’, which stands for “disabled, diseased, dying, dead” - aka the animals deemed unfit for human consumption. “These products can be full of all sorts of nasty stuff, including the same pesticides and antibiotics that are found in meat products marketed to humans,” explains PETA Director Elisa Allen, “which is why many vegetarians and vegans feed their animal companions nutritious and environmentally friendly plant-based meals.”

Elisa also highlights the speciesism at the heart of pet food, especially for owners who are themselves vegetarian or vegan. Despite eschewing meat ourselves because of its cruelty and/or planetary impact, we are still feeding our pets “the flesh of factory-farmed animals, who - despite having exactly the same capacity for suffering and joy as any dog, cat, or human - have endured miserable and gruesome deaths,” she adds.

The importance of researching any major dietary change for pets is clear, however. Like James and Michaela, Elisa emphasises the need for careful planning and “consideration of each animal’s individual needs.”

Eco-friendly gifts to get your pets for Christmas