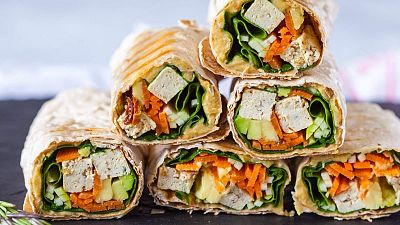 Those taking part in Veganuary do so for all sorts of reasons. While some people just don't want to eat animals, others do it to reduce their carbon footprint from food miles or to be healthier in themselves.

Whatever the reason, many will be making their way through the exciting new launches by restaurants before feeling the traditional January pinch on their wallets, forcing a bit more home cooking.

Some will opt for direct alternatives of their favourite foods. Supermarkets now offer an ever-expanding range of vegan options from dairy-free alternatives to cheese, milk and ice cream, to meat alternatives ranging from Quorn to ‘next generation’ meat imitating burgers and steaks.

The more adventurous might attempt to create their meals from scratch. Perhaps substituting mince for lentils, creating alternatives to cream from cashews, or building burgers from chickpeas.

But where do the ingredients for these new options come from? And can we meet our nutritional needs with locally produced food while remaining plant based? Or would the planet benefit from people taking up a home-grown omnivorous diet?

Is vegan food any more sustainable than locally sourced meat?

Researchers, farmers, dieticians and nutritionists are divided on the issue.

“A 2018 Oxford University study found that a vegan diet is the single most effective way to reduce our environmental footprint,” says Dominika Piasecka on behalf of The Vegan Society.

“Even the researcher himself went vegan as he could not find a sustainable way of farming animals. Shopping locally and seasonally is important, but it pales in comparison to the impact you can have by changing the types of food you eat.”

Unsurprisingly, farmers disagree. The UK is where Veganuary started, and where it continues to get the majority of its sign-ups. Farmers there, and their representational body the National Farmers Union, appear to be maintaining a stony silence towards any mention of Veganuary.

British farmers are always quick to point out that their practices are among the most sustainable on Earth. Indeed, at a conference in 2019, NFU president Minette Batters pointed out the UK red meat industry emits 40 per cent less CO2 than the global average.

What’s more, the union has major plans to make UK farming carbon neutral within the next 20 years.

“We aspire to be producing the most climate-friendly food in the world,” said Batters. “As countries around the world are still making plans on how to deal with the climate crisis, the NFU is already working with farmers, the government and other stakeholders to help British agriculture become net zero by 2040.”

Often, farmers point to the locality of their produce as one of the primary reasons it should be considered a sustainable option. It’s true that for consumers in Europe and North America common alternatives to meat, fish, eggs and dairy can accumulate miles quickly.

Can a vegan diet actually have more food miles?

“Many of the most popular plant-based proteins, including chickpeas, lentils and chia seeds, have to make gas-guzzling journeys to reach our plates,” nutritional therapist and wellness writer Eva Killeen tells Euronews Living.

Prawns can come from Ecuador, Honduras, Indonesia, Nicaragua, Madagascar, Vietnam and a host of places in between, while the most commonly caught tuna can come from the Atlantic, Pacific or Indian oceans. So these are hardly local fare to begin with. But those marketing themselves as direct replacements, Loma Linda’s Tuno and Sophie’s Kitchen Vegan Shrimp, aren't much when the ingredients come from Thailand and Taiwan.

Meanwhile, jackfruit has become a popular substitute for pulled pork. But while much of the pork consumed in the EU comes from the EU, jackfruit is found is eastern regions of Asia.

Lentils commonly sit in for mince, but require sunny climes and a warm summer to grow efficiently so are often imported from regions like northern Africa or the Middle East.

It’s a similar story with the storm of vegan alternatives to cheese making their way onto supermarket shelves over the past year. There were 23 million dairy cows in the EU in 2018, and a plethora of nearby plants for processing into dairy products. But many of the cow-free alternatives are made with coconut oil, which requires a warm tropical climate to grow and is often imported from Pacific regions.

Even the wildly popular Beyond Burger – made primarily from Canadian yellow pea protein – is still shipped over from the US, though rumours abound that the company is looking into Europe-based production.

“This does not need to be the case, as we can very easily obtain the protein we need from locally grown plant-based sources," adds Killeen. "For example, a simple plate of wholegrain pasta made with spelt provides 7g of protein. By adding some green peas as a side dish offers an additional 9g per cup, which is more protein than you’ll find in a cup of milk.”

Killeen makes a valid point. The most pervasive concern around veganism is where to find sources of veggie-based protein. Getting the full recommended 55.5g per day for men and 45g for women can already be a struggle for some, as evidenced by an influx of protein-enriched food items appearing in supermarkets.

But there are plenty of other home-grown alternative protein sources, although it would mean a departure from the average Brit’s taste palette.

“We have a surplus of fava beans here in the UK, and they’re usually exported to north and east Africa where they’re a popular breakfast choice in fūl medames,” says vice president of Pulses UK, James Maguire. Fūl medames is a savoury stew, packed with vegetables and spices.

"Fava beans are very green to grow as you put no fertiliser on them and they put nitrogen back into the soil. They're water efficient too and pulses in general typically contain at least twice the amount protein of wholegrain cereals."

Simply increasing the amount of everyday vegetables could go a long way to cutting down on food miles. The UK has a surplus of large blue peas too, which we could try to use more in cooking. They work well in curries, soups and stews, according to Hodmedod – one of the UK’s few growers of lentils, chickpeas and quinoa.

Planet health versus your health

If you aren't trying Veganuary for the planet or the animals, chances are you tried it for your health. While there are plenty of passionate plant-based people who are happy to share their tips to maintaining a well balanced diet, some of the specialists we contacted didn't feel the same way.

"The heavy impact of intensive meat production on the environment has become clear in the last few years, but expecting all to change to a vegan diet seems to be a knee-jerk reaction to a problem, with an outcome that may be just as bad – highly processed, highly packaged vegan products, low nutrient status foods, nutrient deficient diets leading to long-term chronic disease," says food and nutrition consultant Joy Skipper.

"The heavy impact of intensive meat production on the environment has become clear in the last few years, but expecting all to change to a vegan diet seems to be a knee-jerk reaction to a problem."

"What all of the studies used in the review seem to assume, is that all vegans will be eating a diet rich in local, fresh ingredients, based on pulses, fresh vegetables and fruits, and cooking these ingredients from scratch," she adds.

"When the reality, as can be seen by the increase in vegan products over the past decade, is that a huge amount of people turning to a vegan diet do not cook their own food, but instead will be buying highly processed foods that have possibly been produced overseas, made from products grown on land that was previous forested, and these products will then be transported by air."

SpecialistdieticianNichola Ludham-Raine agrees: "The iron found in meat, in particular red meat, is known as haem-iron, and is better absorbed than the iron found in plants such as beans and pulses. In addition to protein, iron and vitamin B12, meat and fish also provide zinc, which contributes to the normal function of the immune system and helps with normal fertility and reproduction, and potassium, which contributes to normal muscle and nerve function and helps support normal blood pressure."

"Eating locally sourced meat and poultry is one thing that you can do to help the planet by reducing air miles," she adds.

Whatever your point of view, what's not in doubt is that the average consumer should be eating less meat. Plant-based or not, it shouldn't be that hard to eat seasonally and get all the nutrition we need from sources not too far from our doorsteps.

"These are the kinds of options we must all start making use to tackle the escalating climate change nightmare," concludes plant-based champion Killeen.

“Just as flight and beef shaming has now become ‘a thing’, I believe that in 2020 attention will turn to the Chia seed and its foreign friends.”

The one question vegans are tired of being asked