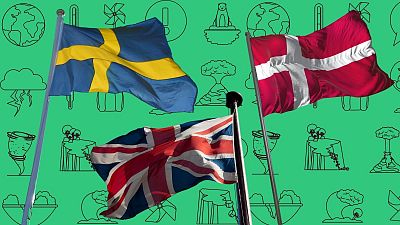 Sweden, the UK and Denmark were officially ranked in fourth, fifth and sixth place for climate action by a report released today.

The top three spots were left empty to symbolise the fact that no country was found to be doing enough to prevent dangerous climate change.

“Even if all countries were as committed as the current frontrunners, it would still not be enough to prevent dangerous climate change,” says the Climate Change Performance Index 2021 report. As a result, even those like Sweden, the UK and Denmark that were ranked highly have “no reason to ease up”.

The US came in last place for a second year running. Over the last four years, the country has dramatically scaled back climate policies and officially left the Paris Agreement in November.

This makes it one of only three countries to receive the lowest rating for national and international climate policies.

Despite a number of nations pledging to be carbon neutral in the next 30 years, the report also found that more ambitious action needed to be taken in the short term to prevent disaster.

“Global net zero commitments for 2050 are nice, but they don’t help us now to achieve the targets to stay on a trajectory to committing to 1.5C,” said Stephan Singer, senior adviser to the Climate Action Network.

“That means all the NDCs [nationally determined contributions] of the rich countries’ climate pledges for 2030 need to be appropriately renewed, adapted and improved.”

These findings were laid out in the Climate Change Performance Index (CCPI), a yearly report which tracks how the world’s biggest polluters are doing when it comes to dealing with the climate crisis. The 57 countries ranked are responsible for almost 90 per cent of global greenhouse gas emissions.

The CCPI looks at each country’s annual carbon emissions, climate policies and energy strategies and surveys 400 environmental experts. It is put together by a coalition of environmental groups including Germanwatch, the Climate Action Network and the NewClimate Institute.

“The EU stands at a crossroads”

Overall the EU was found to be doing well compared to others, climbing from 22nd place last year to 16th in the 2021 ranking. This was “almost exclusively” because climate policies recently introduced were better rated by experts.

There were some countries in the bloc which were outliers when it came to climate progress, however. Hungary and Poland were two that ranked among the lowest, partly because they still have rising emissions. The Czech Republic was also found to be lagging behind.

#EU improves ranking by six places, shifting from overall “medium” ranking to “high” in #CCPI2021. With the ratification of the #EUGreenDeal, aiming to realize net-zero #GreenhouseGas#emissions by 2050, EU boosted its rating in #ClimatePolicy. ➡️ https://t.co/WcuH2lBgb4pic.twitter.com/wSmzkBoUbI

The report’s authors warn that greater efforts are needed by the EU to help keep global warming below 1.5 degrees celsius.

“The EU can become a role model in climate protection with green recovery measures after the coronavirus crisis, by setting an ambitious climate target for 2030 in line with the 1,5°C limit and a good implementation and further development of its Green Deal.”

But it could stumble if it “pursues greenwashing” rather than setting serious climate change targets, he adds.