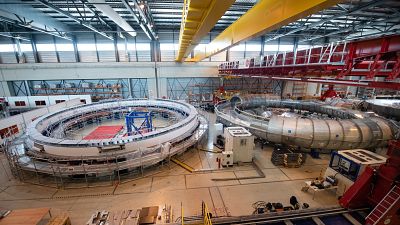 The facility winding giant magnets for the nuclear fusion reactor or 'Tokomak' at ITER in France.   -   Copyright  CLEMENT MAHOUDEAU/AFP
By Rosie Frost  •  Updated: 13/12/2021

The UK government is searching for a site to build the world’s first prototype nuclear fusion power station.

The Spherical Tokamak for Energy Production, or STEP, could be completed as early as 2040. The “ambitious” programme to build a fusion power station comes as part of the 10-point plan for a 'green industrial revolution' laid out by Prime Minister Boris Johnson last month.

“We want the UK to be a trailblazer in developing fusion energy by capitalising on its incredible potential as a limitless clean energy source that could last for generations to come,” says Business and Energy Secretary, Alok Sharma.

A €20bn project to build the world’s largest fusion reactor kicked off in Provence, France earlier this year. It is being funded by a coalition of countries including the EU, UK, China, Japan, Russia and the US.

But this reactor won’t produce electricity for people’s homes, it is instead an experiment to see if nuclear fusion can produce more energy than it uses. The power station the UK is planning to build is much smaller than ITER and it is hoped it can be wired into the national electricity grid.

Currently, the world’s largest working fusion reactor, JET, is located in the UK. But the site at the Culham Science Centre near Oxford where it is located is not big enough to house the STEP project, so the government is searching for somewhere to build it.

Sharma says that whichever community steps forward to be the location of the new power station will have an “incredible opportunity to secure their place in the history books”.

What is nuclear fusion?

Fusion creates energy using the same reaction that powers the sun and stars. Hydrogen atoms are fused together to create helium and release huge amounts of energy as they do it.

Replicating this reaction on earth is tricky. The fuel has to be magnetically levitated to prevent it from melting everything it touches and it has to be heated to 10 times the temperature of the sun to get it going. Scientists have been trying to make fusion work for more than 50 years and it could still be a while before we can effectively power our homes using it.

If successful, however, it offers a practically inexhaustible source of energy without carbon emissions or the problems associated with the kind of nuclear energy we are more familiar with.

That uses fission which breaks one atom into two to create energy. Although it doesn’t create carbon emissions, it does generate a large amount of radioactive waste which remains dangerous for years. Fusion cannot produce a runaway chain reaction, like the one that happened at Chernobyl in 1986, either so no exclusion zone is needed around the site according to officials.

Is fusion a ‘far off dream’?

The UK Atomic Energy Authority (UKAEA) hopes that STEP will prove fusion isn’t just “a far-off dream” but a potential reality for the future of clean energy production. Making it work will still be a huge challenge but the UK government has already committed £222 (€246) million to the project.

“To achieve this ambitious goal will require all the ingenuity and application of the UK’s science and engineering industry,” says Professor Ian Chapman, UKAEA CEO.

The search for a home for fusion in the UK comes as the country is poised to reveal its nationally determined contribution (NDC) - or in other words the country’s commitments to keeping global warming as close to 1.5 C as possible.

If all of the Prime Minister’s recently announced climate promises are met, it could mean a nearly 60 per cent cut in the UK’s carbon emissions by 2030. But a report by Cambridge Econometrics has found that that they won’t go far enough to allow the country to reach net zero by the middle of the century.

The size of STEP means it is unlikely to contribute much to the country’s drive to cut emissions in the near future, but scientists believe that getting any useful amount of energy out of it would be a significant step for the future of fusion power. If fusion can then become a viable source of electricity, it would help to drop carbon emissions around the world, not just in the UK.