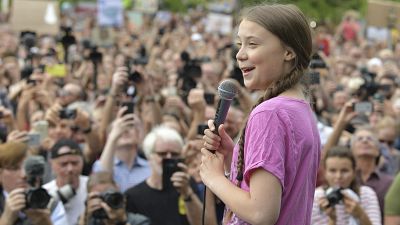 Young activists from Fridays for Future are planning a series of simultaneous concerts across more than 40 countries. They will take to the stage next year alongside artists and scientists to fight for climate justice.

A host of famous names from youth activist Greta Thunberg and supermodel Eunice Olumide to indie rock band The Wombats and environmental filmmaker Jack Harries have taken part in a video marking the launch of the concert series.

Climate Live 2021 will take place on the 24th of April and 16th of October next year. The first events are scheduled to happen in the UK, US and Japan in April.

The live music and education event aims to follow in the footsteps of the 1985 Live Aid benefit concerts. These reached an estimated audience of 1.9 billion people and raised over €100 million for famine relief.

“I started Climate Live in Spring 2019, after being inspired by an interview in which Brian May [lead guitarist of Queen] said there should be a Live Aid for the climate crisis,” says Climate Live founder, Frances Fox.

“I thought this was a brilliant idea to engage more young people in the movement, with our own spin, so immediately started messaging activists from all over the world.”

Using the ‘universal language of music’

Climate strikes have taken place in 7500 different cities over the last few years. The concert’s organisers are hoping to use this network to create events of all sizes around the world. NGO’s such as Greenpeace, Friends of the Earth and Oxfam will also be supporting it.

The event will use “the universal language of music” to engage, educate and empower audiences. Its organisers say that 2021 is a crucial year for environmental action as governments plan to renew their climate pledges at the upcoming COP26 conference. They want to inspire people to ask politicians to do more.

“I applaud our brilliant young people for stepping up again to hold leaders to account in the lead up to COP26 in 2021 when countries must come together to show we are on track for a resilient future,” says former Executive Secretary of the UNFCCC, Christiana Figueres.

“Our young people have asked whether we can hear them. It is time to demonstrate that we are truly listening.”