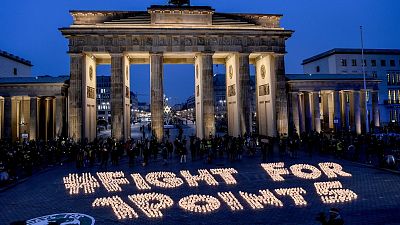 Activists light candles in front of the Brandenburg Gate during a protest marking the fifth anniversary of the Paris Agreement signing.   -   Copyright  Britta Pedersen/dpa via AP
The opinions expressed in this article are those of the author and do not represent in any way the editorial position of Euronews.
By Sam Knights  •  Updated: 26/01/2021

The last year has been tough for climate activists. Protesting is hard at the best of times but, in the midst of a global pandemic, it proved all but impossible. While many activists found new and creative ways to keep the conversation going, in the end the British climate movement was unable to sustain the exuberant energy of 2019.

Many activists are now looking forward to the coming 12 months.

“It's been a challenging year”, says Kay Michael, “and this is our moment for a reset”.

Campaigners have spent the last year in long discussions about the future of their movement. They have taken the time to educate themselves on issues of racial and economic justice, and are now ready to hit the streets.

Gaya Sriskanthan is the co-chair of Momentum, a leftwing political movement that was set up five years ago, following the election of Jeremy Corbyn as Leader of the Labour Party. She tells me that 2021 should be the year in which we “hold the line on what a real Green New Deal is.”

“There are a lot of impressive sounding targets that are being thrown around at the moment,” she continues, “but when you look at the actual levels of investment and interventions proposed, they don't really add up.”

This is a thought echoed by many people in the climate movement. As the western world starts to wake up to the realities of climate and ecological breakdown, there have been repeated attempts to co-opt the language of activism and to repackage the Green New Deal as a neoliberal project.

If the Green New Deal is to remain relevant, then Sriskanthan believes that it “will have to be truly global.”

The danger, warn activists, is that a transition to renewable energy without a focus on justice and equality will not deliver the radical change that we need to see.

“Inequality will dominate the next decade,” says Farhana Yamin. Most countries now acknowledge the scale of the climate crisis, but there is fierce disagreement on the best way to respond.

The British climate movement has sometimes been reluctant to talk about class and race, and Yamin believes that they still have a lot of learning to do. “It is still something that the climate movement struggles to comprehend,” she says. “Climate justice is social justice… they say it, but don't mean it.”

Sriskanthan agrees. “We also need to get to grips with the potential impact of a green economy based on capitalist extractivism,” she says, “this includes taking on tax avoidance, global finance, punitive systems of debt and trade agreements - these all have a profound impact on our ability to take on climate change.”

Thus, activists are urging one another to make the links between the various crises which define our age. It is impossible to address the climate and ecological emergency, they argue, without also advocating for radical system change.

“We need to confront capitalism and the roots of the climate crisis,” says Carola Rackete. In order to do this, she tells me, “we need to link the climate movement to anti-racist and anti-fascist struggles.”

Once again, this is a point that every activist I speak to is keen to emphasise. Zoe Rasbash says that “we need to continue to listen and build outward, engaging with movements for trans-rights, abolition, racial justice, migrant justice, and disability justice”.

Michael adds that “the climate movement needs to build allies everywhere”, and Sriskanthan highlights that “we have to work across many movements” and that the next year is “all about coalitions.”

The disparate factions of the climate movement have not always been the best collaborators. However, slowly, activists are beginning to find ways of building support and mobilising people outside of their traditional networks.

There is a growing awareness of how different parts of the movement function, and the wider ecology of movements that they are a part of.

Rasbash tells me that she now feels conflicted about her own place in the climate movement.

On the one hand, “the pragmatist in me is saying we need a huge push on the Green New Deal this year,” but at the same time she is “now sick to the back teeth of trying to nudge policy to the left” and “right now the anarchist in me is saying let’s just burn this whole thing down and focus on community building.”

This is a familiar question for many activists. Perhaps, intellectually, one might know that a diversity of tactics is vital to the future success of your movement, but where you personally dedicate your energy can be a much trickier decision.

The importance of COP26

Next year, activists will have to bridge this divide once again, when the United Kingdom hosts COP26, the United Nations Conference on Climate Change.

The conference was supposed to happen this year but was postponed due to the coronavirus pandemic.

Kay Michael tells me that “in the run up to COP26, I am sensing that activists and campaigners everywhere are pulling out all the stops to make their movement and their strategy as strong as it can possibly be.”

However, some in the climate movement are also arguing that protests around conference schedules are no longer so important.

Many activists have now given up on the negotiation process altogether and hope, instead, to focus on disrupting the political and economic system that facilitates ecocide. Professor Julia Steinberger says that this will involve “exposing politicians and negotiators as complicit.”

It will be uncomfortable, she tells me, but “the battle lines are very clear at this point”.

For Carola Rackete, this means focusing less on influencing politicians, and more on engaging with other people.

She tells me that “the engagement of citizens will have a huge impact on how quickly things will get worse and how bad it will be”.

It is a plea for everyone to get involved, no matter who they are or where they come from. “All I know is that doing as much as you can now is better than doing nothing,” she says, “the consequences of doing nothing are terrible.”

The consequences of doing nothing are, indeed, terrible and the path we are currently on ends in disasters. Activists know that something huge needs to change in the next few years, and they are imploring everyone to join the fight.

Finally, I ask Professor Julia Steinberger what she thinks will happen next year. “I believe,” she says, “that next year will be the year in which the climate movement goes for the jugular.”

If this sounds like somebody projecting their hopes and dreams onto the coming year, then perhaps it is.

But, whether hopeful projection or heartfelt premonition, one thing is for certain: the climate movement is not going down without a fight.

The climate crisis is only going to get worse: what we all do next is of the utmost importance.

'Live Aid for the climate crisis' endorsed by celebs and activists