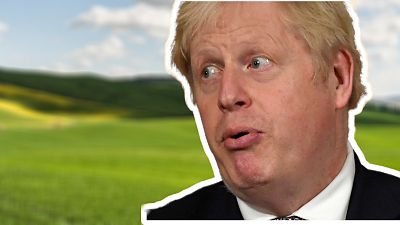 From clean energy and transport to nature and innovative technologies, the UK hopes to portray itself as a world leader in environmental policy, in the run up to the COP26 conference in Glasgow next year.

So what’s in the plan exactly? At a glance:

Stand-out points include a firm commitment to transition to electric vehicles by 2030. This comes after Greenpeace activists raced toy cars through London only last week, calling for the government to ban the sale of petrol and diesel cars in the next ten years.

The pledge involves significant investment into zero-emissions public transport and £1 billion will go towards making buildings more energy-efficient. Also by 2030, offshore wind should be able to power every home in the country, which will require four times the amount of wind energy to be generated than ever before.

In line with previous commitments to safeguard biodiversity, 30,000 hectares of trees are to be planted every year from now on. Lastly, cutting-edge technologies intend to establish the City of London as the global centre of green finance.

A step in the right direction, but still falling short

But does the “ambitious” plan go far enough when it comes to averting the climate crisis? Critics are sceptical.

We spoke to Sir David King, founder and chair of the Centre for Climate Repair at The University of Cambridge.

“The 10-year climate plan from the Prime Minister is to be strongly welcomed as a clear public commitment,” he begins.

“But it is nowhere near enough to manage the British Government commitment to net zero emissions by 2050 or to provide a safe future. As we emerge from the COVID-19 pandemic and its impact on our economy, there needs to be an understanding that this is the opportunity to grow our economy in a direction that is fit-for-purpose in this century.”

It is nowhere near enough to manage the British Government commitment to net zero emissions by 2050.

The Chinese Government is leading the way with investment into their green economy of 2.1% of their annual GDP going forward, King explains, comparing the two major global powers side by side.

Mick Cash, general secretary of the National Union of Rail, Maritime and Transport Workers was also critical, calling the plan “disappointing” and lacking in detail.

“Public transport and rail freight are far more energy efficient than road transport,” he said in an interview with a railway business journal, criticising the government for not putting enough emphasis on the rail industry.

Architects think there is room for improvement too. RIBA president Alan Jones told Building Design magazine that a longer term plan was needed.

“It’s positive to see the PM recognise the need to tackle the UK’s housing emissions crisis. That said, we need a long-term plan – a National Retrofit Strategy – that includes fresh thinking such as a new stamp duty policy to encourage homeowners to invest in sustainability,” he said.

When it comes to leading climate organisations, Greenpeace isn’t happy either. The NGO's UK head of politics, Rebecca Newsom, states outright that “behind the headline is a gaping hole in the funding.”

Behind the headline is a gaping hole in the funding.

“Just £4 billion of the money announced is new, but for a genuinely green industrial revolution, we need long-term policy commitments and funding across every sector of the economy, not just a down payment,” she tells Euronews Living.

Newsom concludes, “as a bare minimum, the government must fulfil its £9.2bn manifesto commitment to making our homes warmer, and invest an extra £10 billion per year in greener public transport, walking and cycling solutions across the UK.”