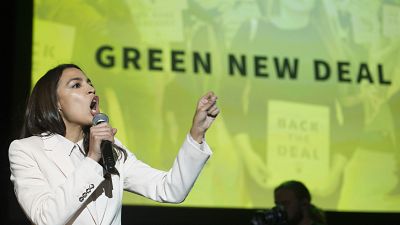 From climate strikes to anti-racism protests, young people around the world are finding themselves on the frontlines of many different crises.

Climate change especially has become a daily concern for many under 30 who are left with the question: can my vote really make a difference?

In 2019, young voters had a big influence on the EU elections leading to unexpected success for Green parties. The surge of support for the Greens was highest in Germany where Die Grünen came second behind Angela Merkel’s CDU party.

The weeks leading up to the 2019 election saw massive climate protests across Europe. Young people walked out of school as the movement, led by 17-year-old Greta Thunberg, demonstrated their frustration with political inaction on environmental issues.

More importantly, however, they felt empowered that their opinions could change the way governments responded to climate change. That empowerment and sense of collective opinion meant that this historically disenfranchised group turned out in record numbers to vote.

So could young voters also influence the US election too?

As climate issues like fracking become a greater priority for voters, the US could be set to see a green wave all of its own.

The youngest woman ever elected to Congress, Alexandra Ocasio-Cortez’s first piece of legislation was the Green New Deal. It is a 10-year plan that would see fossil fuels phased out, massive changes to the nation’s infrastructure and a green overhaul of the US economy.

The importance of young voters showing up and having their say in US politics is not lost on the 31-year-old politician. Recently, she joined live streaming platform Twitch to stream alongside some of the most popular names in online gaming. She was also joined by fellow congresswoman Ilhan Omar, a supporter of environmental justice in her state of Minnesota.

The stream was one of the platform’s biggest ever. At one point, over 430,000 people tuned in to watch Ocasio-Cortez play the popular online game ‘Among Us’.

At the end of last year, 73 per cent of Twitch users worldwide were aged 16-34 and the platform has seen significant growth since. It isn’t surprising, then, that someone looking to encourage young voters to turn out might decide to give streaming a go.

Although Ocasio-Cortez’s message during her appearance was to encourage people to register to vote, targeting a younger audience is likely to see more votes for Democratic nominee Joe Biden.

Galvanised by youth activism, including organisations like the Sunrise Movement and Zero Hour, there is emerging support among young people in the US for the Green New Deal. Polling by The Nation last year revealed that it was popular with millennials, particularly the promise of new green jobs.

A poll of Americans aged 18-29 by the Institute of Politics at Harvard University found that the group has record levels of enthusiasm for voting in this election, too. For these young voters, Biden comes out on top, with 56 per cent supporting the Democratic nominee.

While it seems as though Millenial and GenZ voters are more likely to be skewed towards Biden, there is another group of young people who could swing the vote on the climate issue.

Among supporters of the Republican party, there is an increasing generational divide. Young Republicans, between the ages of 18-39, are almost twice as likely to say that human activity contributes to climate change than older generations according to a survey by the Pew Research Centre. They were also more likely to agree that the federal government was doing little to reduce the effects of climate change.

Where some see the only solid climate policy option as the Green New Deal, others are demanding the Republican party put forward a more decisive plan on climate action. These young conservatives, such as Benjamin Backer, founder of the American Conservative Coalition, see the climate as a bipartisan issue.

After touring across three states and speaking to voters he says that he is seeing more and more common ground between Republican and Democrats.

“Whether it’s climate change or any other issue, we have far more in common than we think,” he wrote in a recent Twitter post. “No matter what happens on November 3rd, let’s start to build a better, cleaner, more equitable, and more prosperous America on November 4th.”

It is an issue that has potential consequences for the rest of the world too, not just the US.

Scientists say that in the next decade, the world needs to halve its greenhouse gas emissions to avert disaster, ideally reducing them to zero before 2050. Many believe that four more years of Trump could have a negative impact on international climate efforts with governments emboldened by his rollbacks on environmental policy.

Climate is clearly a top issue for young people across political allegiances. How politicians respond to the climate crisis could earn them the support of those set to become the biggest cohort of voters over the next 10 years.

US election: Why is healthcare a key issue with Latino voters?