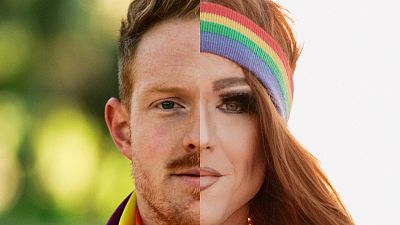 Pattie Gonia is nothing short of an icon in the intersectional environmentalism movement. Hiking up Colorado’s rocky mountain range in six-inch heels, her aim is to bring positivity and inclusivity to the outdoors.

Just over two years ago, Wyn Wiley created Pattie as his drag alter ego. Ever since, she has taken on a whole life of her own with nearly 300K people following her on Instagram. Pattie is an expression of Wyn’s queer identity, which he feels enables him to connect with nature in a powerful way.

Growing up in Nebraska, ‘being a man’ meant being outdoorsy. As a young boy scout, Wyn would go hiking and tried his best to fit into the binary gender norms that surrounded him. When he came out of the closet at 18, he was told, ‘hey we love you, we accept you’, but he felt the love was conditional. People told him it was ok to be gay, but “never do anything effeminate, never do drag, don't paint your fingernails.”

After 10 years of playing by the rules and what he refers to as ‘straight-passing’, Wyn discovered drag and found that exploring nature as Pattie was far more fulfilling.

“I'm trying to reclaim the outdoors with my art. I have a lot of respect for what I learned growing up, but I’m also holding a middle finger up to it,” he tells me.

“Pattie lets me involve my cultural art forms, as a queer person, in nature. It's a beautiful, ethical exercise I try to live out in my day to day life.

“She is the utmost representation of me and how I care for the planet - whether it’s wearing a wig made of 100 pieces of trash, or normalising outfit repeating, or only having 4 wigs as opposed to 40. Drag is a space with so much stuff in it, so I say to myself, ‘how can I fight against that consumerism?’”

But, humble as ever, Wyn admits that he isn’t always perfect! “Hey, I fail a lot, and that is ok. What’s important is that Pattie lets me infuse my love of the outdoors with my love of celebrating queerness. Mushing it all together.”

What does intersectional environmentalism mean to you, I ask, and when did you first come across it?

“It’s funny,” he says, “until you have a word for something, you don't really know you’re doing it. When I first heard the term used, I was like, OH...this is what I do - it has a name.

What I’ve learnt is that we all have closets, no matter who we are.

“Intersectional environmentalism lets us weave in our humanity, our culture, our queerness and our colour, into environmental work. We tell ourselves that all these issues are separate, but I think the magic happens when you intersect one thing with another. If you look at any space where people are making change, you will find queer people, you will find people of colour, you will find indigenous people - and you’ll find women,” explains Wyn.

It’s about being unapologetically ourselves in any given space. A closet is no place to be, he says, and when we all accept who we are without fear or judgement, we invite others to do the same.

The power of entertainment

Entertainment and humour can also play an important role in environmental work, we both agree. Whether it’s home-made signs at protests reading: “the planet is hotter than my boyfriend” or funny memes about climate change denial - it’s natural to be drawn to the medium of comedy when the going gets tough.

In no way should humour diminish the gravity of the climate emergency. In fact, it can act as a coping mechanism and, perhaps more importantly, laughing brings us together.

“At the end of the day, we are all just humans who want to be entertained and educated,” says Wyn. “If humour isn't present, a space often doesn't feel inviting. It's super needed in the environmental space.

In Pattie’s work, she struts, she dances, she poses - she entertains us, all in the name of climate justice.

“I'm here to have fun. When I hear climate scientists get on the stage and speak, I have so much respect for them, but I don't live in that world. I feel like what I do is appliable in my life. Humour is tangible, it’s relatable.”

Wyn and I both reflect on the fact that something we all experience as environmentalists is being in a constant state of learning. We find ourselves processing things deeply for a long time, before we’re able to take action. Humour can help us understand and recognise deep issues relating to the climate, in a way that doesn’t feel too overwhelming.

Entertaining might be Wyn’s chosen medium, but he’s endlessly in awe of other climate activists for the work that they do. He mentions award-winning zero waste chef, Max La Manna and how much he admires his approach to cooking, “I actually make his recipes all the time!”, and Leah Thomas, “her voice is so beautiful and she’s fighting so hard for climate justice.”

“If you only knew that I’m a muggle and I’m trying to be 10% as cool as all the activists I respect. I feel like I've done all of my work on the shoulders of greats.”

Wyn concludes with some words of wisdom. “If I could encourage people to do one thing, it’s to spend more time outdoors, get out there, because it will make you realise exactly what’s worth saving.”