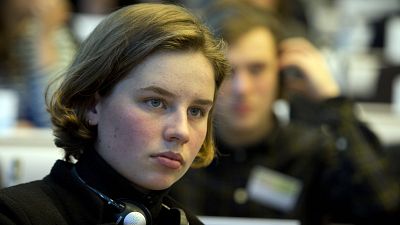 She might only be 19 years old, but Anuna de Wever’s voice is loud and clear on the world’s stage.

Dubbed the ‘Belgian Greta Thunberg’, Anuna is one of the leading activists in the School Strike for Climate movement. Already, her list of accolades is impressive. Anuna mobilised a whole generation in Belgium through mass climate strikes, prompted by her frustration that Belgium was one of only two countries not to sign the COP24 High Ambition Coalition. The coalition, comprising 35 countries back in 2018, committed to advance proposals on climate policy.

“Before we knew it, we were thousands of people on the streets every week, all over the news, claiming the political agenda and forcing our leaders to listen and step up,” she tells me.

As a result, Anuna was given her own weekly column in Belgian magazine HUMO. At just 18, she presented a TEDx talk alongside fellow environmental campaigner Adélaïde Charlier, entitled ‘Respect Existence or Expect Resistance’.

Just a couple of months later, she was invited to set sail on the Regina Maris ship for a low-carbon transatlantic journey to the 2019 United Nations Climate Change Conference in Santiago, Chile. She was among the youngest activists on board.

“After that I sailed to Latin-America and visited the Amazon forest to learn from indigenous communities and scientists of the forest,” she says, not wanting to miss out on the rare opportunity while already half-way across the world.

From Brussels to the rest of the world

Anuna began her activism in the Belgian town of Mortsel, where she grew up. But she soon moved her school strike to the capital city and home of the European Union, Brussels, where she felt she could reach more people and have a bigger impact.

“I started my climate activism very locally, trying to change Belgian policy. But very soon, I realised our political system wasn’t shaped to be able to do that.”

She describes politicians in Belgium as “quite incapable and very ignorant when it comes to climate change”. Anuna started to realise it wasn’t enough to just protest in her own country, that’s when she decided to focus more on trying to make changes at an international and EU level.

I myself, am fighting Belgian policy with everything I can, but it’s irresponsible, childish, ignorant and it’s not at all facing the climate crisis in a serious way.

As the geographical hub of the EU, a political union which has laid out ambitious laws on climate change, you would think Belgium was a country worth its salt when it comes to environmental policy. I ask if there is anything we, the rest of Europe, can learn from the place Anuna started her activism?

“I don’t think EU countries can learn a lot from Belgium,” she says decisively. “I myself, am fighting Belgian policy with everything I can, but it’s irresponsible, childish, ignorant and it’s not at all facing the climate crisis in a serious way.”

In February of this year, after returning from South America, Anuna started an internship with the Greens-European Free Alliance in the European Parliament. She is also studying for a degree in social science at the same time.

“This together with university and activism was definitely a challenge,” she says.

“We’re working on projects like the EU-Mercosur trade agreement, EU climate targets, getting the media to record on carbon budgets… But on all of these factors, Belgium is lacking behind completely.”

Anuna is not one to beat round the bush when we speak, she says it like it is.

“I’m not an optimist,” she admits. We both agree that confronting the reality of the climate crisis doesn't leave much room for a positive outlook.

“Anyone who is aware of the urgency of the situation wouldn’t be able to be optimistic. We’re racing towards heatwaves, droughts, famine, millions of climate refugees, inhabitable countries… and nobody realises.”

That being said, she doesn’t think all is lost just yet. If she did, she wouldn’t be fighting so hard to effect change on a global scale.

“I do have hope. I do believe that we can still turn this around. We just have very little time to do this. And that’s why we need everyone to rebel and step up, to literally fight for our future.”

We are maybe fighting for our future, but there’s people fighting for their current lives right now. Those are the people that need to be heard.

As we speak, I wonder how she copes with being such a high profile figure in the climate movement, constantly reading, writing and speaking about the ominous fate of our planet. I can’t help thinking that it must be tough. How do you look after your mental wellbeing, as an activist, I ask?

“Self care is definitely not a priority for me. I have all the basic needs like shelter, food, education, medicine, sanitary items...and there’s a lot of people that don’t,” she says, with an unflinching sense of principle.

“People in the Global South are the least responsible, but are already facing the toughest consequences of it. This is why it’s extremely important to focus less on first world problems and keeping my priorities straight. We are maybe fighting for our future, but there’s people fighting for their current lives right now. Those are the people that need to be heard.”

As we near the end of our conversation, we come to the topic of Anuna’s plans for the future. I’m curious where the young powerhouse sees herself in 10 years. Running for government perhaps?

“I don’t know if it’ll be a political position, it might be working in an international NGO or volunteering with climate refugees, but I want to have an impact in the biggest way possible,” she concludes.

“I want to keep questioning the ‘normal’ and think critically of our society. In whatever way, I hope our generation rebels against the current system that’s exploiting animals, people and the earth.”