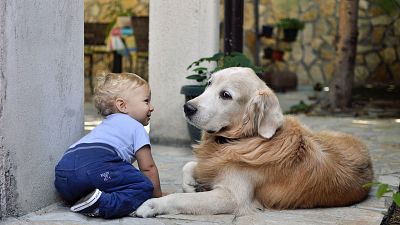 Reducing carbon emissions is at the top of the political agenda and concern over the future of the planet has never been higher.

While world leaders commit to ever bigger targets on how to reduce their country’s carbon footprints, individuals look for ways they can make changes in their everyday lives.

Perhaps buying an electric car, increasing recycling, or getting rid of the tumble dryer and hanging out clothes in the sun will make a difference.

But what about forgoing or replacing a beloved pet - or even limiting the amount of children you have? Is that something you’d consider to reduce your carbon footprint?

Both owning a pet and having a child can increase your carbon footprint in different ways, but which one is worse?

A study released in 2017 found that having one fewer child equaled a reduction of 58 tonnes of CO2 for each year of a parents’ life.

Average emissions must fall to two tonnes per person to limit global temperature increases to 2 degrees C by 2050. Globally the average is four tonnes, although this massively varies depending on your country of residence.

The figure was calculated as part of a study led by Seth Wynes. He and collaborator Professor Kimberly Nicholas came up with it by adding together all the potential emissions of the child and their offspring and dividing it by the parents’ life span.

Emphasising the importance of the short-term decision to go car, flight and meat free, Professor Nicholas says, “We wanted to know…what are the personal choices that somebody in a high emitting country makes that makes the biggest difference for the climate.

“In the long term we found that there’s a big climate impact from creating a new person.”

“In the long term we found that there’s a big climate impact from creating a new person.

“I think it’s important to understand that that isn’t a tool to solve the climate crisis because we only have a few years of the remaining carbon budget and that means we have to make system changes.

“Our study wanted to look at the numbers and compare apples to apples.

“The decision if...and how many children to have is a human right and it needs to be protected and respected - and the decision to fly in planes and drive SUVs is not.”

The calculation is based on the emissions of someone in a ‘developed’ nation and with the spectre of eco-fascism haunting climate change discussion Professor Kimberly is keen to point out the ethical dilemmas.

“What you can take from our study is that the decision to have a child is a really big life decision and you don’t need a scientist to tell you that,” she says.

“The whole point is so we can have a world that works for everybody and where kids who are alive now and kids who will be born soon and, in the future, will have the opportunity for a good life.”

Is your pet killing the planet?

But the other side of the argument is that through meat and fish consumption, impact on wildlife and plastic waste, pets are also deeply bad for the environment.

Pet ownership has increased enormously in recent years and even more so because of the pandemic.

The European Pet Food Industry (link) estimates that 85 million European households own at least one animal. This has serious implications for local wildlife; in the UK estimates are that cats and dogs kill up to 200 million wild prey a year.

“If you are going to get to negative emissions you have to address pet emissions. The amounts involved are a bit staggering really,” he explains.

“Nobody wants to have their vested interests impacted whether they are an oil worker, a gas worker or people owning a pet.”

With most pet food made from meat and fish, of which the environmental damages are well documented, Mccarthy wants people to seriously consider the effects they have on the planet.

“We are facing two ecological crises one is climate and the other is nature. If you don’t solve both they are both existential issues for humanity.”

However despite these allowances Donnachadh still believes owning a pet is a mistake, “It is a selfish and cruel act to nature and the animal itself.”

Going car free will reduce your carbon footprint by 2.4 tonnes a year, recycling by 0.21 and hanging clothes out to dry the same. So could you seriously consider going pet or child free for the planet?