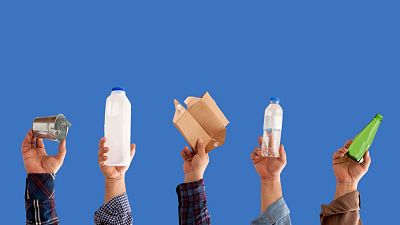 Stood in front of your selection bins, plastic container in hand, it can be a real puzzle to work out where your waste needs to go to be recycled properly. In often neglected areas like the bathroom, it can be even harder to make sure your plastic waste isn’t ending up in landfill.

It isn’t surprising with so many symbols in use around the world, each meaning different things. As companies up their sustainability game and use more recycled and recyclable plastics, if things aren’t made clearer it is only likely to get more confusing.

We want to recycle but don’t know how

Siegle specialises in encouraging people to make positive changes for the planet, even sorting through people’s bins pre-pandemic in the name of investigating our habits.

“L'Oreal Paris Elvive has done some research and really, that research confirms a couple of things for me and for many other people, I'm sure,” she says.

The cosmetics company’s recent survey showed that people are keen to do the right thing. They want to stop plastic pollution from littering their favourite natural beauty spots and for climate goals to be successful ”for their children's future, if not their own.”

But the results also found that we don’t always know what recycling symbols actually mean.

Of the people asked, nearly half said that they found the array of different logos confusing and that this confusion led them to recycle things that couldn’t be recycled. Only 37 per cent of people could correctly identify what the Mobius Loop meant, a symbol that has been in use for 50 years in the UK.

“As time has gone on, people have got more and more confused because there are lots of different schemes for recycling,” says Siegle, “and the logo has lost its impact.”

She adds that it is important for companies, like L’Oreal, to make things simple for us. In response to the findings, the company has redesigned its labels to dedicate a third of the text to recycling instructions.

“Sometimes it takes a big shift from a big brand to come in and say, we're one of the best selling products, we are going to use 100% recycled and recyclable material in our bottles ahead of our own targets,” says Siegle, “really cutting that impact and making it easy for customers to do that.”

How do we make recycling simple?

It’s not just the UK where sustainability symbols can be confusing.

Earlier this year a global survey was carried out by the United Nations Environment Programme (UNEP) and Consumers International looking into recycling labelling on plastic packaging. It found that only 17 per cent of labels gave us quality information to make informed decisions about recycling.

Experts gave a fifth of the recycling symbols they looked at worldwide a negative score in areas such as reliability, relevance, clarity, transparency, and accuracy. They said that the information being provided was leading to confusion and mistrust.

The report’s authors came up with a number of recommendations for those that create policies around recycling and companies to use. Broadly, they said that definitions for things like biodegradability, compostability and recyclability had to be standardised to avoid confusion.

The experts also suggested that the ‘chasing arrows’ symbol, like that used in the Mobius Loop, should be limited to only communicating information about whether a product can actually be recycled.

Overall, the report called for more consistent, and clear global labelling systems to encourage people to reduce their waste and make a shift towards a circularity that is desperately needed. To tackle the scale of the crisis, the team of experts said, it has to be an approach that involves all stakeholders- from us as consumers, to companies and governments too.

Why is recycling important?

It is estimated that only 9 per cent of all plastic ever produced has been recycled. Making sure that the resources we have already extracted from the planet are used to their full potential is a key element of circularity that we are currently missing.

Siegle says that what we have now, a linear economy thinks of products and packaging as disposable. We take the resources, we make something from them and then eventually that becomes waste.

“That system is not compatible with the nature and climate targets that we know we need to achieve.”

We need to stop thinking of products and especially packaging as just waste and instead tap into materials can be reused. She tells me to imagine it like a little backpack being carried by that product with all of the resources that have gone into making it.

“When you think of a product, and it can be an everyday product, just think about all the embodied resources that went into making that product,” Siegle explains, “it has taken oil, often, if it's plastic, it has taken lots of different materials, it's taken energy, so carbon is embodied in that product.”

Making the process of recycling clearer and easier for the people buying these products means we can harness this underused resource.

“The chance to get some of that energy back and to recycle, regenerate that material into something else useful, is quite thrilling to me, actually,” Siegle laughs.

“Imagine the greatness of the opportunity, how much it increases, if you can turn a bottle into a bottle, so we can close that loop. And we can keep that going for as long as possible.”