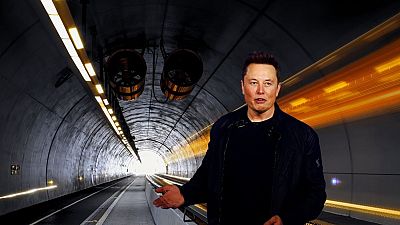 Las Vegas is set to expand its transportation network - but this time, underground.

A company owned by Elon Musk is developing a web of tunnels under the city, to speed up transport across the area. Musk’s plan is to populate the tunnels with Tesla all-electric vehicles (AEVs), meaning commuters will be able to travel miles underground at incredible speeds.

The Boring Company, which Musk developed to “solve the problem of soul-destroying traffic” aims for roads to “go 3D”, meaning both flying cars and tunnels are on the table so far.

Musk is already in the process of building a shuttle beneath the Las Vegas Convention Center, where Tesla AEVs will move visitors between exhibition halls. These shuttles have been given permission to transport up to 16 people at a time, with up to 62 vehicles in service simultaneously.

This is the first commercial project for the technology titan’s infrastructure business, which he founded in 2016.

This week, two new resorts in Las Vegas have announced plans to join the network of super tunnels. Both Wynn Las Vegas and the under-construction Resorts World Las Vegas have both sought approval for projects which would link them to the existing Convention Center transit system, which is due to be completed in early 2021.

“The connector is an important step for Wynn as the resort continues its investments in the future of eco-friendly meetings and conventions in Las Vegas,” said a spokesperson for the Las Vegas resort.

The tunneling project at the Convention Center is estimated to cost around €47m, as part of a much larger expansion of the site costing over €860m. Over three-quarters of the tunnels have already been completed.

Where will the tunnels lead to?

The success of Musk’s initial tunnels in Las Vegas means he is one step closer to achieving his planned ‘Vegas Loop’, which would see much of the city accessible by underground electric shuttles. According to the Boring Company, the express connection will operate at speeds of up to 155mph, meaning a journey which usually takes half an hour at peak times, could take just three minutes.

A normal journey of around four to five hours by car, could take under two hours with little-to-no carbon emissions.

The next stage for these tunnels would be linking the Las Vegas project up with the existing tunnels in Los Angeles, meaning a normal journey of around four to five hours by car, could take under two hours with little-to-no carbon emissions.

Last week it was announced that The Boring Company was the frontrunner to produce a similar loop at Ontario Airport, California. The high-speed electric transport tunnel would link the airport with nearby city Rancho Cucamonga, as a more cost-effective and greener alternative to traditional rail systems.

Could this same technology be used in Europe too? For major cities without an existing underground network, this could be a realistic option. As Paris and other major cities consider a future without cars, perhaps underground tunnels for drivers or electronic shuttles are the best way to secure an environmentally conscious future.

Global engineering and infrastructure company Aurecon is working on similar projects across Oceania, with a new tunnel in Melbourne, Australia and Auckland, New Zealand in development. The idea is for these tunnels to transform communities by easing gridlocked traffic at peak hours, and reducing pollution across the cities.

“Musk’s futuristic tunnel system is ambitious and innovative. Going underground makes sense and many cities have vast tunnel networks beneath heavily populated areas, for example, the London Underground – so we know it can work. His vision presents an exciting alternative to our gridlocked present,” says Aurecon tunnelling expert Tom Ireland.

“Many of the world’s largest cities have reached their capacity to absorb new infrastructure ‘on the ground’. These cities are looking at solutions – both above and below the ground – to overcome mobility challenges.”

He concludes, “Navigating through long-established built form can be technically and aesthetically challenging, so creating below the ground transport networks such as underground rail and road tunnels is high on many cities’ agendas, and these projects are currently transforming cities around the world.”

It remains to be seen whether similar green initiatives will pop up under other major cities. Perhaps in the meantime, we should be making use of those ancient tunnels found in rural Cornwall?