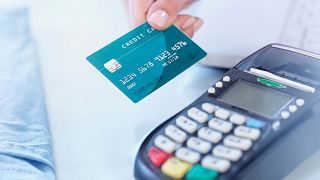 A unique eco-startup is fundraising to be the first card company to make their user’s spending carbon neutral.

Tred is a UK finance company that offers debit cards made from recycled ocean plastic paired with an app that tracks the users spending-based carbon output. The waiting list for those in want of their bright green cards has doubled in 2021 alone.

Co-founders Peter Kirby and Will Smith have spent years developing a millennial-friendly app that converts pounds spent into kilograms of carbon emissions.

The aim is to help people understand how over-indulgences such as fast fashion damage the environment. Users can view colourful graphs that outline what they’re doing to help - and hinder - the planet.

The company estimates that the average cardholder will pay £14 (€16) a month.

Those with the greenest footprints are also rewarded with additional trees planted on their behalf from the company.

Kirby says the company wants to “bring together currently fragmented ‘green money’ options” to make it easier for people to help tackle the climate emergency.

Crowdfunding has been vital in helping Tred reach its next steps - their fundraising total currently stands at £744,000 (€856,000), almost double their original target.

It doesn’t stop there - the company now plans to expand into offering users investment opportunities in the green energy sector.

Currently, the majority of the world’s payment cards are made from PVC plastic. This is a synthetic plastic polymer which is made from salt and, more importantly, oil. This means that, while the material is durable, it does not naturally biodegrade, instead it retains its form for decades before breaking down into smaller plastic pieces known as microplastics.

In order to reduce the amount of excess plastic in landfill, global payment network Mastercard is launching a sustainable card programme to offer to banks and issuers. The new, eco-friendly cards will be made from either recyclable, biodegradable or reclaimed ocean plastics.

We are all reliant on payment cards for easy spending - but think of how much plastic is hiding in our wallets. In July 2019, 61.9 million credit cards were issued to UK residents, along with 97.3 million debit cards.

Around 6 billion payment cards are produced every year worldwide. These are usually replaced every three to four years, collectively contributing to around 5.7 million tons of plastic in landfill, according to Mastercard.

The new scheme is called a Green Payments Partnership (GPP) and the sustainable card offerings are available to consumers in over a dozen countries globally. So far, over 60 financial institutions have signed up to roll out cards with approved materials made from recyclable, bio-sourced, chlorine-free, degradable and ocean plastics. These include Santander, Crédit Agricole and DBS Bank in Taiwan.

“Our goal is simple: we want to help banks offer more eco-friendly cards to consumers, and we are taking concrete steps to bring about that change," says Ajay Bhalla, president of Cyber & Intelligence at Mastercard. "This way, everyone benefits - it’s better for the environment, it’s better for business and it meets evolving consumer needs."

LIM Him Chuan, general manager of DBS Bank, said in a statement that he was “pleased to partner with Mastercard on this important environmental initiative.” He added that the new DBS Eco Card will be “the first credit card in Asia made from polylactic acid — a renewable and biodegradable polymer material that emits no toxic gases during incineration.”

Additionally, Mastercard has created a directory of sustainable card materials with information on where to source them. It hopes this will help other banks make the swift transition.

Just last month, Visa announced plans to make cards from recycled materials too. The Earthwise™ High Content Card will be made with up to 98 percent upcycled plastic, in collaboration with CPI Card Group.

One bank has been using biodegradable payment cards since 2017. Triodos claims to be the leading ethical bank in Europe and has been working to make banking more environmentally conscious since its launch in 1980 in the Netherlands.

The Triodos card is made from a plastic substitute called polylactic acid (PLA), which is created from renewable sources such as plant leaves and corn, rather than petroleum. PLA is biodegradable, recyclable and non-toxic if incinerated.

“Sustainability has always been at the heart of the bank’s operations,” Bevis Watts, CEO of Triodos Bank UK tells Euronews Living. But payment cards are just “one element of this,” he says.

“We’re pleased to see that other banks are starting to consider the environmental impact of their debit cards, but it’s important that sustainability is reflected throughout their banking operations – including how they use depositors’ money,” Watts continues.

Triodos wants to “democratise” the banking sphere, having launched a campaign this year called ‘Don’t be a fossil fool’ to raise awareness around the lack of sustainable investing.

“There is still more work to be done in the sector to encourage banks to move their investments away from polluting and carbon-intensive industries to instead support more sustainable and environmental projects,” Watts concludes.

Takeaway food could have a staggering impact on your carbon footprint