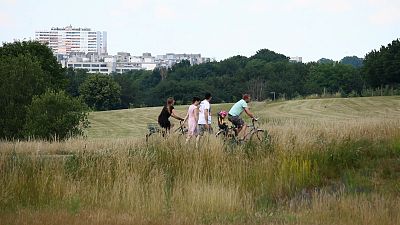 For this month's episode of Climate Now, Euronews visited Frankfurt, one of the warmest cities in Germany, to find out how it is adapting to rising global temperatures and staying cool in the summertime.

June 2020 is joint warmest on record

But first, we have the latest data from the Copernicus Climate Change Service, which show that June 2020 was the joint-warmest on record, together with June 2019, with temperatures globally an average of 0.5 degrees Celsius above the 1981-2010 average.

The map of the surface air temperature anomaly for the planet shows the many areas shaded in pink and red which experienced warmer than average temperatures. They include many parts of Africa and the Americas.

The southern winter brought the usual high variation in temperatures in Antarctica. In Europe, we can see that the southern part of the continent was colder than average, while Scandinavia and central and eastern Europe were warmer than expected.

One of the biggest stories was in Siberia, where the year so far has been much warmer than average.

The map below of this vast region of Russia does have some blue areas, indicating cooler than average temperatures, while Arctic Siberia went through a sustained heatwave in June.

The city of Verkhoyansk is used to extremes of temperature, but the reported 38 degree high there was exceptional. Hitting such highs inside the Arctic circle may constitute a new record, although verification of the measurement is still ongoing.

Why was Siberia so warm?

The heatwave in Siberia was the culmination of many factors. Martin Stendel, an expert in Arctic climate science at the Danish Meteorological Institute told Euronews that there had been a persistent flow of warmer air into the Siberian Arctic from Europe at the beginning of the year, followed by a large high-pressure system which sat over the region in June.

"We went already into spring warmer than normal, and we have already for several weeks in a row now had a blocking high-pressure system in the area of northern Siberia, and in June and July, of course, we have the midnight sun, so the sun can shine down under this high pressure more or less around the clock, and this has led to very warm temperatures," he said.

The warmer temperatures earlier in the year had also melted the snow, meaning the darker surface below had been exposed earlier than usual, also contributing to the heat.

"If there was still snow on the ground, then all the energy from the sun would be needed to thaw this snow first," explained Stendel. "But the snow had already disappeared much earlier than it otherwise would have done, which means that the temperatures already in May, which normally is a winter month up there, could rise to these extraordinarily high values."

Some 'cool' ideas to keep Frankfurt from sizzling

The topic of heatwaves takes us to our report for this month's Climate Now, as we wanted to know how cities in Europe are adapting to rising global temperatures.

The financial capital of Germany had a record average annual temperature of 12.9 degrees in 2018, classing it alongside Cologne, Stuttgart, and Heidelberg as one of the country's warmest cities.

The urban jungle can become much hotter than the surrounding countryside, as concrete absorbs heat, buildings reflect sunlight, and human activity generates even more warmth.

The satellite image below from German startup ConstellR reveals the heat map of the city. The line of the river is a clear blue thread of cool, while the airport is a hot strip of red and yellow, and the downtown area is dotted with hotspots.

To combat this heat, the city has what are known as 'Luftleitbahnen', or ventilation corridors. These are stretches of land all around the city where there are no high buildings or large copses of trees to allow cooler air from the surrounding areas to flow downtown.

The difference in air temperature between the rural outskirts and the inner city is up to 10 degrees Celsius, and the ventilation corridors carry a lot of air. The 'Luftleitbahn' on the river Nidda allows up to 40,000 m3 of cold air per second to flow into the city on summer nights.

Hans-Georg Dannert, head of climate adaptation at the Frankfurt Environment Department, said: "Of course, we first have to look at the whole city and connect the cold and fresh air areas with the city, with such 'ventilation corridors' as we see here. Then there should be small green islands in the city: parks, trees, avenues, and very specific measures, such as we want to ensure free access to drinking water with drinking fountains that we put up in the city."

The 'green islands' of Frankfurt are literally growing, as the city now requires certain new buildings to have a green roof or facade, and subsidises the installation of green roofs on private properties, too.

Plants cool the environment as evapotranspiration from their leaves takes heat out of the air.

Lara-Maria Mohr, Frankfurt Freshens Up project manager, from the Frankfurt Environment Department, told Euronews about the benefits of planning this way.

"Green roofs have numerous positive effects: They protect a building, they insulate and they cool it. This also saves costs. Noise is swallowed, fine dust is filtered by the plants and heavy rainfall effects are cushioned by the fact that the rain can be absorbed by the substrate.

"In addition, every inhabitant of the building gains a new habitat, as do insects and birds," she added.

The difference made by greening rooftops is significant. On a sunny day, a traditional black rooftop can reach over 70 degrees Celsius, while a green roof remains below 30 degrees or less.

Water management is another area of focus. Downtown in Frankfurt, city planners have favoured more porous surfaces to allow for evaporation to cool the streets.

In new developments on the edge of town, it means creating waterways to collect rainwater.

Each change is small, but the average temperature is rising every decade, and they want to keep the city comfortable and liveable, as Maurice Wagner, a physical geographer at the Frankfurt Environment Department explained.

"If we do nothing now, the consequences are of course clear: for risk groups, this can have serious consequences, including premature death from heat. But also people who are still young and fit and who may not belong to the risk groups: they will also suffer.

"And generally speaking, cities will completely lose quality of life if no action is taken," he added.