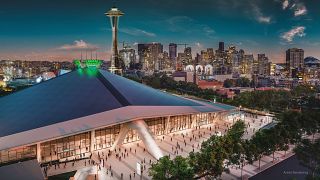 Online shopping giant Amazon has just bought the lucrative rights to name a stadium in Seattle, US, but its choice of moniker may not be quite what you expect.

Rather than simply calling it the ‘Amazon Stadium’, the company has chosen to dub the venue the ‘Climate Pledge Arena’ in a nod to its recently launched environmental fund. CEO and founder of the e-commerce company, Jeff Bezos says he wants the stadium to serve as a “regular reminder of the importance of fighting climate change”.

Bezos is the world’s richest person and recently set records for his wealth as his net worth reached nearly $172 billion. In an Instagram post announcing the partnership, he claimed the stadium will be “the first net-zero carbon-certified arena in the world”.

Amazon has laid out sustainability plans for the Seattle hockey venue that include 100 per cent renewable energy, transparency on carbon emissions and a system using reclaimed rainwater to maintain the ice rink.

The Climate Pledge Arena will be home to the Seattle NHL (National Hockey League) team, as professional ice hockey returns to the city for the first time since the 1970s. The side’s first season is slated to be next year, during the 2021-22 season.

Tickets to some events at the stadium will also act as free passes for public transport, including trips on Seattle’s newly refurbished monorail, to encourage people not to travel by car.

The company behind the redevelopment of the stadium, Oak View Group called the partnership “a visionary step for the facilities business and sport and music industries”. CEO Tim Leiweke says the goal is for the Climate Pledge Arena to be “the most progressive, responsible and sustainable venue in the world”.

“It’s not just about one arena—it’s a platform for us to step up and heal our planet.”

The Climate Pledge Arena is named after Amazon’s new initiative, which aims to propel companies to carbon neutrality by 2040 - ten years earlier than the Paris Agreement goal.

Founded last year, the Climate Pledge Fund will invest in “visionary entrepreneurs” creating products and services that will help businesses to become greener. So far it has promised $2bn (€1.78bn) for clean energy startups, and in April launched a $10m (€8.9m)grant scheme for forest conservation. These pledges represent just over 1 per cent of Bezos’ net worth.

The founder and CEO says that the fund will “help companies reduce their carbon impact and operate more sustainably”. It will invest in a multitude of industries from transportation and logistics, to food and agriculture with the aim of accelerating the creation of the “zero carbon economy of the future”.

The move comes after thousands of Amazon employees signed an open letter to Bezos and Amazon’s board of directors last year. After no action was taken, the group behind the letter, Amazon Employees for Climate Justice, threatened a walk-out of 3,000 corporate workers in September to pressure the company into reducing its greenhouse gas emissions.

A day before employees planned to abandon their work stations, the company announced the Climate Pledge Fund.

Many remain unconvinced that the news signals dedication to sustainability from Amazon. Eva Putzova, a candidate running for Congress in Arizona, criticised the announcement on Twitter saying that “instead of meaningful action, [Bezos] named an arena.” She added: “Billionaires will not save us”.

Others have drawn attention to the company’s poor record on environmental issues, employee rights, taxes and inequality. Two workers were recently fired for speaking to the press about Amazon’s climate record during their time organising last year’s walkout and the company’s treatment of warehouse staff during the coronavirus pandemic.

An article in Gizmodo saw its writers brainstorming alternate names for the arena “that more accurately reflect Amazon’s ethos”. Suggestions included the “Secretly Bankrolled By Shell And BP Arena” and the “[Jeff Bezos Shouting ‘Earth’ Over Deafening Drilling Sound] Arena”.

Swipe below to take a look at some of the tweets