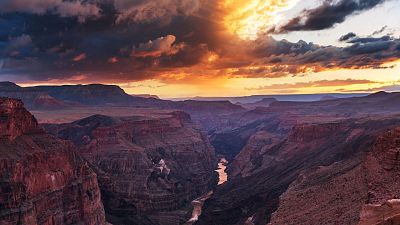 Plastic lasts pretty much forever - but the durability that makes it so useful to us in our everyday lives means the handy material is creating a widespread pollution problem.

Every year over 250 million tonnes of plastic is produced and that amount is increasing every year. When it is thrown away, some of it breaks down into tiny pieces, called microplastics, that find their way into every part of our ecosystem. From the water we drink to the food we eat, they are everywhere and they’re often invisible.

Plastic particles can be small enough to be picked up by weather systems and eventually rain down from the sky, polluting the place where they land. Last year, UK capital London was found to have the highest levels of atmospheric microplastic pollution recorded, compared to cities in China, France, and Germany. The study done by King’s College University discovered that the particles came from a variety of sources, including thin films from single-use items and foam from polystyrene packaging.

There was one main offender, however. Fibrous microplastics created by the breakdown of synthetic textiles made up 92 per cent of the pollution measured. These fibres are shed into the water when clothing made from fabrics like polyester and nylon are washed.

Plastics travel on the wind

Because these fragments can be so small, they can be transported by the wind and end up falling to the ground a good way off from where the original plastic item was initially dumped. Storms help the plastics get into the atmosphere, causing them to spread from urban centres like London further out in the countryside.

It has now been discovered that some of the most isolated wilderness in the United States has seen rainfall containing plastic pollution. Research by a team at Utah State University has found that more than 1000 tonnes of plastic per year fall in protected areas of nature like the Grand Canyon and Joshua Tree National Park. That is equivalent to around 182 million plastic bags and, as with those found in cities, most came from fibres given off by the clothing we wear.

“We were shocked at the estimated deposition rates and kept trying to figure out where our calculations went wrong,” said lead scientist, Professor Janice Brahney.

“This ubiquity of microplastics in the atmosphere and the subsequent deposition to remote terrestrial and aquatic environments raise widespread ecological and societal concerns,” Brahney adds.

By looking at where the storms that deposited these microplastics had come from, the team were able to map how they were travelling such long distances. Rain was found to be removing plastics from the atmosphere, thanks to the tiny particles acting as a seed for droplets to form around. An even bigger concern was dry weather systems where winds would blow the pollution for thousands of miles, via jet streams in North America which run West to East across the continent.

Although the results of the research are shocking, Brahney explains that working out how these pieces of plastic end up in certain places is the best way to prevent their spread. “Identifying the key mechanisms of plastic emission is the first step in developing global-scale solutions.”